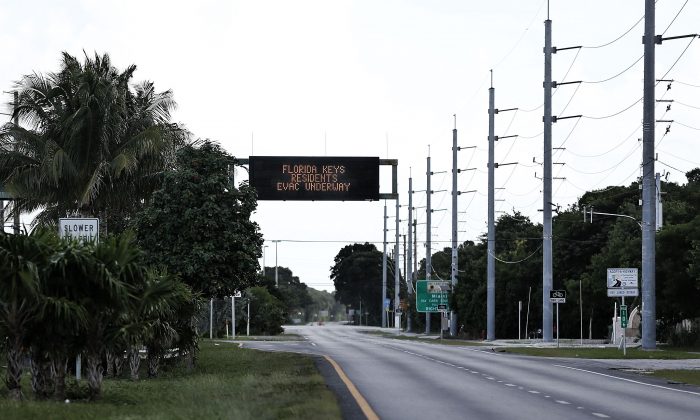 KEY LARGO, FL - SEPTEMBER 08: The roads are empty after most residents have already evacuated as Hurricane Irma heads towards the the Florida Keys on September 8, 2017 in Key Largo, Florida. The entire Florida Keys are under a mandatory evacuation notice as Hurricane Irma approaches the low-lying chain of islands south of Miami. (Photo by Marc Serota/Getty Images)
US

Miami a ‘Ghost Town’ Ahead of Hurricane Irma

The normally bustling Miami and its namesake beach have been deserted ahead of Hurricane Irma.

The airport was totally deserted, according to photos and videos uploaded to social media.

The National Hurricane Center said Irma weakened from a Category 5 storm to a Category 4 system—but it still packed winds of 150 mph.


“No doubt [about] landfall in Florida anymore, just a matter of exactly where & who gets the worst damage. Hurricane force wind gusts peninsula wide, said Dave Epstein, a meteorologist with CBS.

“No longer any spread or uncertainty about landfall of Hurricane #Irma … this is happening for sure, unfortunately,” added Ryan Maue, a meteorologist and hurricane expert.

The death toll from the havoc the storm left on its way rose to 21 people Friday. Some islands were virtually flattened with photos showing extreme devastation.

“We are running out of time. If you are in an evacuation zone, you need to go now. This is a catastrophic storm like our state has never seen,” Florida Gov. Rick Scott said, according to Reuters.

While earlier forecasts predicted Irma will move north along the eastern coast of Florida, forecasts from Friday, 2 p.m. ET show the storm traveling closer to the western coast of the peninsula, according to weather models by the University of Wisconsin.