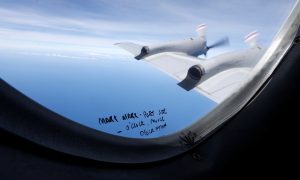 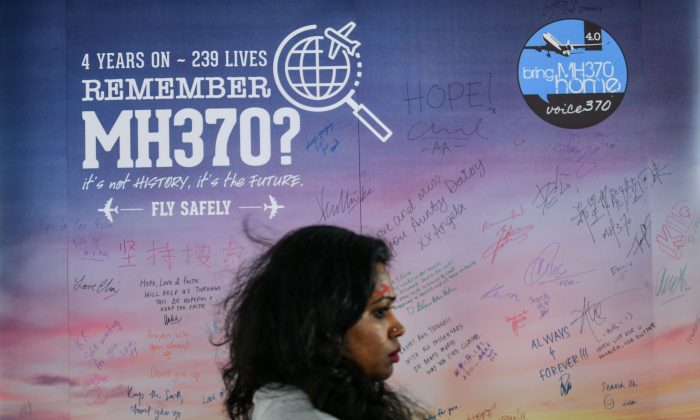 A woman walks past a banner bearing solidarity messages for passengers of the missing Malaysia Airlines flight MH370, during a memorial event in Kuala Lumpur on March 3, 2018. (Manan Vatsyayana/AFP/Getty Images)
Asia & Pacific

A “mysterious 200-pound load” was added to the flight list of MH370 after take-off, according to an engineer whose wife and two children were on board the Malaysia Airlines flight which disappeared in 2014.

In an interview with Le Parisien newspaper, 54-year-old Ghyslain Wattrelos said French investigators made the discovery while looking into the disappearance of the flight, which vanished while en route from Kuala Lumpur to Beijing on March 8, 2014 with 239 people on board.

“It was also learned that a mysterious load of 89 kilos was added to the flight list after take-off,” he told the outlet.

Wattrelos, who lost his wife, Laurence, 51, and two of his three children, Adrien, 17, and Ambre, 13, on the flight, believes foul play was involved in the incident.

“A container was also overloaded, without anyone knowing why. It may be incompetence or manipulation. Everything is possible. This will be part of the questions for the Malaysians,” he added.

The information was detailed in a report on the passengers and baggage by French investigators at Air Transport Gendarmerie’s research section in France, reported the Daily Mail.

After examining flight data at the Boeing headquarters in Seattle, French investigators said that the pilot was in control of the airplane “until the end” and made “abnormal turns” before apparently crashing.

A possibility of a stowaway hijacking has also been discussed by experts as a theory over what happened to MH370.

“One is the hijack of the aircraft through a crew member. The second is a hijack coming from a passenger,” he continued.

“A third option, which is a fairly unusual one, would be a stowaway. And then of course the fourth option is an electrical takeover of the aircraft from a ground-based station.”

The aircraft lost contact with Malaysia Airlines just 38 minutes into the flight, and five years on from its disappearance, wreckage has not yet been recovered.

Confirmed debris that washed ashore in the western Indian Ocean helped narrow the search area where U.S. technology firm Ocean Infinity focused, but it failed to uncover any evidence.

A Malaysian-led independent investigation report released last July showed lapses in the government’s response and raised the possibility of “intervention by a third party.”

Investigators, however, said the cause of the disappearance cannot be determined until the wreckage and the plane’s black boxes are found. The report reiterated Malaysia’s assertion that the plane was deliberately diverted and flown for over seven hours after severing communications.

But it said there was no evidence of abnormal behavior or stress in the two pilots that could lead them to hijack the plane. All the other passengers were also cleared by police and had no pilot training.

On March 3, Malaysia’s transport minister Anthony Loke told reporters that the government is open to new proposals from Ocean Infinity or any other companies to resume the hunt for MH370.

Ocean Infinity’s CEO, Oliver Plunkett, said the company hopes to continue its search for the jet with better technology it obtained in the past year.

“We haven’t given up hope. … We hope we can continue the search in due course,” Plunkett said.