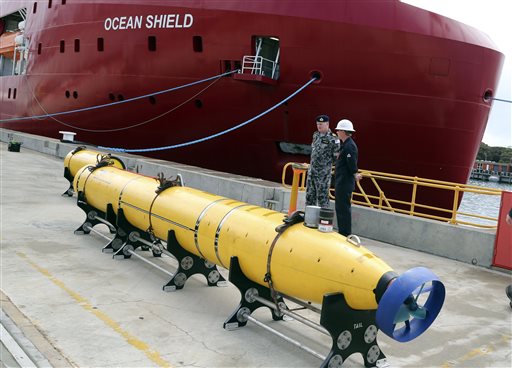 In this March 30, 2014 file photo, an autonomous underwater vehicle (AUV) sits on the wharf at naval base HMAS Stirling in Perth, Australia, ready to be fitted to the Australian warship Ocean Shield to aid in the search for the missing Malaysia Airlines Flight 370. In an interview with The Associated Press, Martin Dolan, chief commissioner of the Australian Transport Safety Bureau, said that he was cautiously optimistic that the lost jet would be found. Dolan said he was confident the airliner was close to a 700-kilometer by 80-kilometer arc of ocean identified from satellite data that investigators would be scouring in the next phase of the search. (AP Photo/Rob Griffith, File)
Asia & Pacific

Investigators have discovered that the pilot of the missing Malaysian Airlines plane plotted a route to a remote island in the southern Indian Ocean.

The search for the missing plane is now focused in the same area.

The route was deleted before MH370 vanished on March 8, 2014. It was programmed into the home flight simulator machine used by Zaharie Shah, the captain of the missing plane.

The discovery of the deleted route has fueled suspicions that Shah had something to do with the plane’s disappearance, reported the Telegraph.

Although there is a distinct lack of hard evidence that Shah had sinister motives when getting on board that day, suspicion of his involvement in whatever happened has grown as investigators have gradually eliminated other potential suspects and causes of its disappearance.

Detectives raided Shah’s home in Kuala Lumpur shortly after the disappearance and news had cropped up about the home simulator. Shah was a frequent user who corresponded with others in the aviation community, often discussing simulators. He helped teach others how to use them.

The movement of the missing plane indicated that something happened on board but investigators have so far been unable to piece a narrative together.

The new search area is around an unnamed island in the far southern Indian Ocean, where Shah had programmed the flight to in his simulator.

“The discovery leaves Capt Zaharie as the prime suspect in a crime which cannot yet be proven to have been committed – and Malaysian police have been careful in their public comments to stress that all leads are still being investigated and no conclusions have been reached,” the Telegraph reported.

CANBERRA, Australia—The next phase of the underwater search for the missing Malaysian passenger jet will focus on an area of the Indian Ocean hundreds of kilometers (miles) south of the first suspected crash site, a senior investigator said Friday.

Martin Dolan, chief commissioner of the Australian Transport Safety Bureau, said an announcement will be made next week on where a 60,000 square kilometer (23,000 square mile) search of the ocean floor for wreckage using powerful sonar equipment will be focused.

Dolan said he expected the probable crash site would be hundreds of kilometers (miles) south of where a remote-controlled underwater drone scoured 850 square kilometers (330 square miles) of seabed in the first fruitless search that ended last month. That search area was defined by acoustic signals suspected to have come from the missing plane’s black boxes, which promised to be the best clue to finding Malaysia Airlines Flight 370. But those signals are now widely thought to have come from some other source.

In this April 1, 2014 file photo, an observer on a Japan Coast Guard Gulfstream aircraft takes photos out of a window while searching for the missing Malaysia Airlines Flight 370 in Southern Indian Ocean. (AP Photo/Rob Griffith, Pool, File)

The new search area will not be based on new data, but on refined analysis of existing satellite information from the doomed Boeing 777 after it veered off course during a flight from Kuala Lumpur to Beijing on March 8.

“All the trends of this analysis will move the search area south of where it was,” Dolan said. “Just how much south is something that we’re still working on.”

“There was a very complex analysis and there were several different ways of looking at it. Specialists have used several different methodologies and bringing all of that work together to get a consensus view is what we’re finalizing at the moment,” he said.

Private contractors are expected to start the new search far off the west Australian coast in August using powerful side-scan sonar equipment capable of probing ocean depths of 7 kilometers (4.3 miles). The job is expected to take up to 12 months to complete.

Two survey ships are currently mapping uncharted expanses of seabed in the search zone before the sonar scanning starts.

The search area is in the vast expanse of ocean that was thoroughly swept for floating debris by search aircraft in the weeks after the plane disappeared with 239 passengers and crew aboard. No trace of plane has been found.

Dolan said the new search area will not be as far southwest of the coastal city of Perth as the initial air search had focused, near the limit of planes’ range and in storm-prone seas.