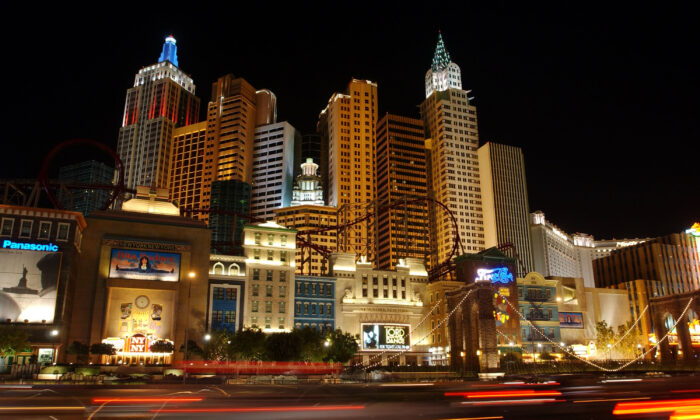 Traffic on the Las Vegas Strip streaks past the replica of the New York's skyline that forms the New York New York hotel, in Las Vegas, Nev., on Nov. 16, 2001. (David McNew/Getty Images)
Companies

MGM Resorts International is selling the operations of The Mirage Hotel & Casino to Hard Rock International for $1.075 billion in cash, the company announced on Monday.

The Mirage, an iconic strip resort located in Las Vegas, opened in 1989 and was acquired by MGM Resorts in 2000 for $4.4 billion in cash. It is best known for its 90-foot Strip-side volcano.

“This transaction is a significant milestone for MGM Resorts, and for Las Vegas,” said Bill Hornbuckle, CEO & President, MGM Resorts International in a statement.”As part of the team that opened The Mirage in 1989, I know firsthand how special it is, and what a great opportunity it presents to the Hard Rock team.”

The sale is expected to close in the second half of 2022 and is likely to deliver to MGM Resorts net cash proceeds, after taxes and estimated fees, of about $815 million.

Paul Salem, Chairman of the Board of Directors, MGM Resorts International, added that the announcement marks “the culmination of a series of transformational transactions for MGM Resorts during the last several years.”

“The monetization of our entire real property portfolio, together with the addition of CityCenter and our agreement to acquire The Cosmopolitan of Las Vegas, will position the Company with a fortress balance sheet, premier portfolio, and significant financial resources to pursue our strategic objectives,” Salem said.

Under the new agreement, MGM Resorts will retain The Mirage name and brand, licensing them to Hard Rock for up to a maximum of three years royalty-free while it finalizes its plans to rebrand the property.

VICI Properties Inc., which will be the real estate owner of the Mirage once the acquisition is complete, will work with Hard Rock to facilitate a new long-term lease agreement.

Hard Rock said it plans to build a guitar-shaped hotel on the 77-acre property and rename it Hard Rock Las Vegas while adding that it looked forward to welcoming the Mirage’s 3,500 employees.

When complete, the newly-styled hotel will be a “fully integrated resort welcoming meetings, groups, tourists and casino guests from around the world to its nearly 80 acre center-Strip location,” as per the company.

MGM Resorts added that it will “remain disciplined allocators of our capital to maximize shareholder value” and will continue to maintain a strong balance sheet, return cash to shareholders and pursue, “targeted growth opportunities that advance our vision to be the world’s premier gaming entertainment company.”

The sale is the latest in several on Las Vegas Boulevard for MGM in recent months.

In July, the Las Vegas-based company announced it would purchase Infinity World Development Corp’s 50 percent interest in CityCenter Holdings, LLC for $2.125 billion, making it the sole owner, and acquire the Aria and Vdara real estate for $3.89 billion in cash.

In September, the company said it had entered into a definitive agreement with Blackstone to acquire the operations of The Cosmopolitan of Las Vegas for $1.625 billion. The deal would put the ownership of the luxury resort hotel into the hands of the Cherng Family Trust (CFT), the single-family office investment firm of the founders of Panda Express.