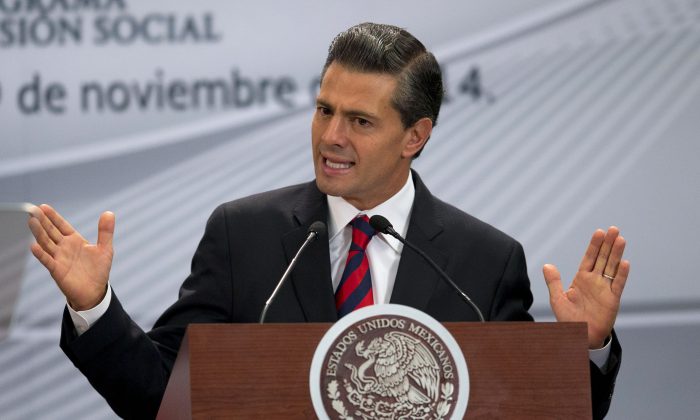 Mexico’s President to Reveal Details of His Wealth

MEXICO CITY—President Enrique Peña Nieto said Wednesday he will reveal the details of all of his assets following the controversy over what many Mexicans see as a conflict of interest in his wife’s purchase of a multimillion-dollar mansion.

After praising his wife, actress Angelica Rivera, for sharing how she got the Mexico City mansion from a company that has government contracts, Peña Nieto said he will make all of his assets public even though the law doesn’t require it.

“Following what my wife has done, I have decided to make public the whole of my financial disclosure statement, because as president I appreciate and value more the confidence of Mexicans than the right to confidentiality as a public servant,” he said during a visit to the western state of Michoacan.

Peña Nieto has reported the amount of his income and the number of houses and properties, but not the details.

For example, according to his financial disclosure, he has four houses, four lots and an apartment. Except for saying he sold two houses, he has said only that he inherited an apartment and that he received the other properties as “donations,” without revealing under what circumstances or who gave them.

He did not say when he would make the further details public.

Earlier this month, the news website of journalist Carmen Aristegui revealed that the president had a private residence registered in the name of a subsidiary of the company Grupo Higa, which has received public works contracts. Later the government said the home actually belonged to the first lady. Late Tuesday, she announced that she planned to sell her rights to the home because of the criticism.

A few hours before Peña Nieto spoke Wednesday, presidential spokesman Eduardo Sanchez insisted there was no conflict of interest in the purchase of the mansion.

Sanchez said on MVS Radio that the first lady is not a public servant and thus not authorized to sign government contracts. He said the company tied to the mansion is just one of more than 4,000 companies that have received public contracts.

“Such a conflict does not exist,” he said of the case.

“Any place in the world this would be a gigantic scandal,” political scientist Jesus Silva-Herzog Marquez wrote Monday in the newspaper Reforma. He has been among the most critical of the deal and asked if the house was a gift from the company.

In a video posted on her website Tuesday night, Rivera said that after a 25-year acting career she received a payment from Televisa in 2010 that included a house.

She added that she decided to buy a neighboring property and signed a contract with a real estate agency for 54 million pesos (about $4 million) for eight years at an interest rate of 9 percent. She said she had paid off about 30 percent so far.

“I have nothing to hide,” Rivera said. She said that in addition to the house, Televisa gave her more than 88.6 million pesos (more than $6.5 million).

The company selling the mansion is Grupo Higa. It received infrastructure contracts when Peña Nieto was governor of the state of Mexico, which neighbors the capital, before he became president in December 2012.

Grupo Higa has also received federal contracts under his administration and was part of the consortium chosen to build a high-speed rail line in Mexico. Following strong criticism over how that contract was awarded, Peña Nieto canceled the deal and announced the contract would be rebid.

The president’s spokesman said Grupo Higa has only two contracts worth 430 million pesos (about $31.6 million) with the federal government, including a project to build a new hangar for presidential aircraft. He said this amount was less than 1 percent of 184 billion pesos (about $13.5 billion) spent so far on federal infrastructure projects under Peña Nieto.