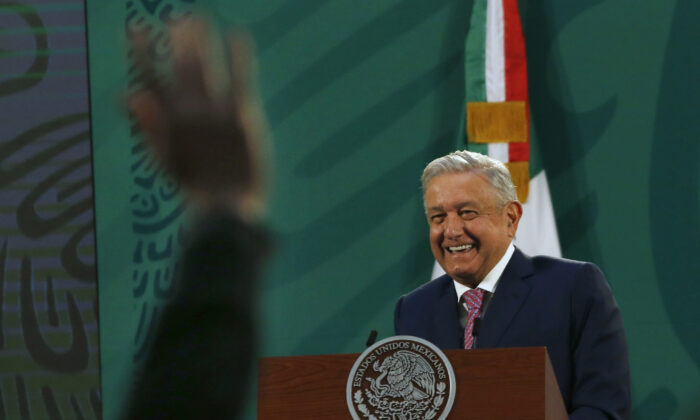 MEXICO CITY—Mexican President Andrés Manuel López Obrador returned to his daily morning news conferences on Feb. 8 after a two-week absence prompted by a COVID-19 diagnosis, but vowed not to wear a mask or require Mexicans to use them.

“There is no authoritarianism in Mexico … everything is voluntary, liberty is the most important thing,” López Obrador said. “It is each person’s own decision.”

López Obrador revealed he received experimental treatments, which he described only as an “antiviral” medication and an anti-inflammatory drug.

The president also revealed that he twice tested negative in late January in rapid tests that are widely used in Mexico, before a more thorough test—apparently PCR—came back positive the same day.

“I came through well, healthy,” López Obrador said, noting he had been doing breathing exercises as well. “We are back on our feet again, in fighting style.”

Many residents of Mexico City have been unable to find beds at Mexico City’s overcrowded hospitals, and have been forced to treat sick relatives at home. López Obrador was treated at the apartment where he lives in the city’s National Palace.

Despite Mexico’s dearth of vaccines—the country hasn’t received new shipments in weeks, and is down to its last 55,000 doses—López Obrador repeated his faith that the country will get enough vaccines from Pfizer, Russia, China, and India to vaccinate all Mexicans over the age of 60 by the end of March.

That would imply the daunting task of giving about 15 million people at least one dose in just a month and a half.

López Obrador has held his daily news conferences almost every working day for more than two years, and this was the longest he has been absent from them.