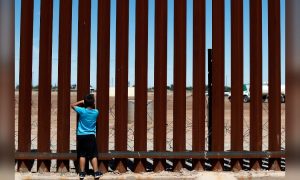 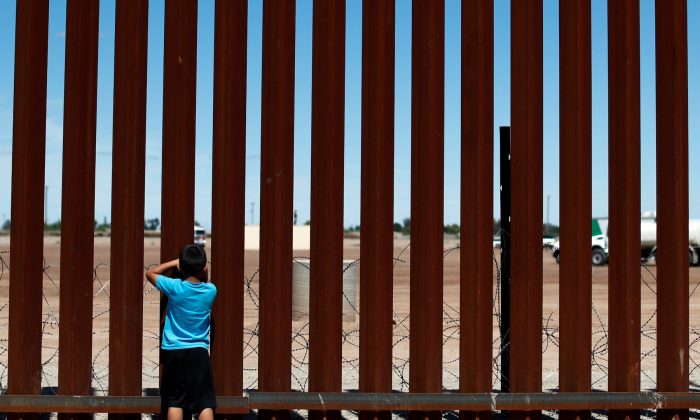 A child looks through the border wall during the visit of U.S. President Donald Trump to Calexico, California, as seen in Mexicali, Mexico, on April 5, 2019. (Reuters/Carlos Jasso)
Politics

Mexican officials said that the deployment of National Guard Forces to its southern border it shares with Guatemala will begin on June 12 and is expected to advance quickly.

“Starting from today, and in the coming days, the deployment is going to progress rapidly,” Foreign Minister Marcelo Ebrard said during a news conference on June 12 with President Andres Manuel Lopez Obrador.

The deployment of troops is part of a deal between Mexico and the United States, reached on June 7, to stem the flow of illegal immigrants coming into America.

Trump warned on May 30 that he will impose a 5 percent important tariff on all goods coming from Mexico if the country does not take action to tackle the influx of illegal immigration at the U.S.-Mexico border.

Mexico subsequently sent a delegation, led by Secretary of Foreign Affairs of Mexico, to Washington to seek “an agreement for the benefit of the two nations.”

After three days of negotiations, the United States and Mexico reached an agreement that would see an expanded implementation of the Migrant Protection Protocols (MPP), commonly known as the “Remain in Mexico” policy and increased security at the southern border. The implementation of the tariffs against Mexico was subsequently averted.

Ebrard explained that Mexico agreed to a 45-day timeline to demonstrate that its increased enforcement was effective.

The foreign minister also said that Mexico had established a working group with a number of Central American countries such as Guatemala, Honduras, and El Salvador to coordinate efforts in ebbing the flow of illegal immigration.

He added that Mexico will again meet with U.S. officials to discuss further details of the new deal with the aim to ensure faster asylum proceedings.

On June 10, President Donald Trump announced that the two countries had signed key portions of an immigration deal, which is awaiting approval by Mexico’s legislative body, and added that if the deal is not ratified then the tariffs on Mexican products would be reinstated.

“We have fully signed and documented another very important part of the Immigration and Security deal with Mexico, one that the U.S. has been asking about getting for many years,” Trump wrote. “It will be revealed in the not too distant future and will need a vote by Mexico’s Legislative body!”

We have fully signed and documented another very important part of the Immigration and Security deal with Mexico, one that the U.S. has been asking about getting for many years. It will be revealed in the not too distant future and will need a vote by Mexico’s Legislative body!..

“We do not anticipate a problem with the vote but, if for any reason the approval is not forthcoming, Tariffs will be reinstated!” the president added.

….We do not anticipate a problem with the vote but, if for any reason the approval is not forthcoming, Tariffs will be reinstated!

When he was asked about the portion of the agreement that hasn’t been announced yet, the president told reporters on June 10 that “we have an agreement on something that they will announce very soon. It’s all done. And they have to get approval, and they will get approval. If they don’t get approval, we’ll have to think in terms of tariffs.”

He later added, “We do have one other thing that will be announced at the appropriate time. But they have to get approval from their legislative body.”

According to a June 7 declaration about the deal, Mexico vowed to “take unprecedented steps to increase enforcement to curb irregular migration” including the deployment of its National Guard. The country will also work toward dismantling “human smuggling and trafficking organizations as well as their illicit financial and transportation networks.”

The MPP was first trialed in at the San Ysidro border crossing between San Diego and Tijuana, Mexico, but has so far expanded to the points of entry in Calexico, California, and El Paso, Texas.

In return, the Trump administration said they were committed to working toward accelerating the processing of asylum claims as well as finalize removal proceedings as quickly as possible.

The two countries also agreed to continue a discussion on the next steps to be completed in 90 days.

Mexico will try very hard, and if they do that, this will be a very successful agreement for both the United States and Mexico!

“Mexico will try very hard, and if they do that, this will be a very successful agreement for both the United States and Mexico!” the president said on June 8.

On June 10, Trump also criticized the Democratic party for doing less than Mexico in preventing illegal immigration at the southern border.

“It’s sad that, when you think of it, Mexico is doing is more for the United States, as of now, than Congress. And, specifically, the Democrats, they have to get their act together,” he told reporters at the White House.

“They have to work and get something done because you got a tremendous problem at the border. You have people pouring in. And it means crime. It means drugs. It means so many other things.”

Trump has made stopping illegal immigration a priority during his two years in office. Data from Customs and Border Protection (CBP) have shown record highs in the apprehension of illegal aliens at the southern border. U.S. border agents detained more than 132,000 people crossing from Mexico in May, the highest level since 2006.

Additionally, during the first seven months of the 2019 fiscal year, 531,711 illegal aliens have crossed the border into the United States, according to CBP data.