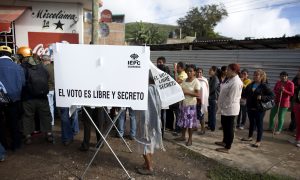 MEXICO CITY—Despite widespread disillusionment with his government, President Enrique Pena Nieto on Monday emerged from midterm elections with an expected congressional majority that will let him forge ahead with his reform agenda without compromising with opponents.

With 89 percent of the ballots counted, Pena Nieto’s Institutional Revolutionary Party, or PRI, and its two coalition partners received about 40 percent of the vote in Sunday’s election.

Under Mexico’s mixed system of direct and proportional elections for congressional seats, analysts predicted the PRI coalition will ultimately control 245 to 263 seats in the 500-seat legislature.

“I can assure you that Pena Nieto will be able to put together a majority with certainty,” said Roy Campos, director the Mitofsky polling firm. “Having 251, which is what he needs, is practically a done deal.”

But “if the government measures the electoral result as an endorsement,” Campos added, “that means they didn’t understand this vote.”

Halfway through Pena Nieto’s six-year term, the election was widely seen as a referendum on a government whose approval ratings have been hit by scandals over real estate deals with government contractors, a less dynamic economy than expected and ongoing security concerns, as well as suspected massacres of civilians and the disappearance and presumed murder of 43 students who were grabbed by police last September.

But a schism in the country’s main leftist Democratic Revolution Party caused by former two-time presidential candidate Andres Manuel Lopez Obrador breaking off to launch his own party, known as Morena, cost the left seats and benefited the PRI.

A year after it was formally recognized, Morena will have its first representation in Congress while Democratic Revolution, which was winning less than 11 percent of the vote in the preliminary results, could lose about a dozen seats.

The third main political force, the conservative National Action of the Party that produced Mexico’s two previous presidents, maintained more or less steady support with about 21 percent of the vote.

Analysts noted that in many places around the country there were no local elections for mayor or governor, and voters were casting ballots for unknown congressional candidates. In such races, the PRI enjoys an advantage because of its large, entrenched political machine.

“It’s a sigh of relief (for the PRI), yes…,” said Jose Antonio Crespo, a political analyst and professor at the Center for Economic Research and Teaching. “What was not reflected was discontent with the government and the parties. All the indicators of discontent did not appear … except at the local level.”

The most notable example was the election of Jaime Rodriguez, known as “El Bronco,” who became the first independent candidate in Mexico to win a governor’s race, in Nuevo Leon state on the border with Texas. This was the first year independents could seek office under a recent electoral reform.

In doing so, the horseback-riding, boot-clad Rodriguez ousted the PRI from a key state that includes the business hub of Monterrey.

Rodriguez filled a void where fed-up voters felt that traditional parties weren’t responsive to their needs, and it could set a precedent for similar candidacies in the future, Crespo said.

“The independent gives you hope, an expectation, simply because it’s something different,” he said, “even though we have no proof that he will be more effective.”

In the city of Cuernavaca outside the Mexican capital, recently retired soccer star Cuauhtemoc Blanco was ahead in the vote for mayor and poised to take over an office previously held by the PRI. He represented the tiny Social Democratic Party, which doesn’t exist in most other states.

And the major city of Guadalajara turned its back on the traditional powers, the PRI and National Action, by giving an overwhelming victory to Enrique Alfaro of the center-left Citizens Movement, which barely registers in polls in much of the country.

Pena Nieto was boosted by a bump in support for the allied Green Party, which jumped from about 6 percent of the vote to 7 percent following a controversial campaign in which it was fined millions for ignoring campaign finance laws. That could give the Greens as many as 20 new seats.