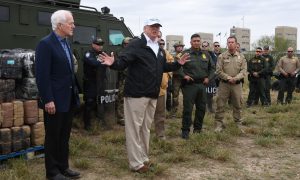 Is Mexico Paying for Trump’s Wall or Not?
0
Share Now
FacebookTweetParlerEmail
Copy Link 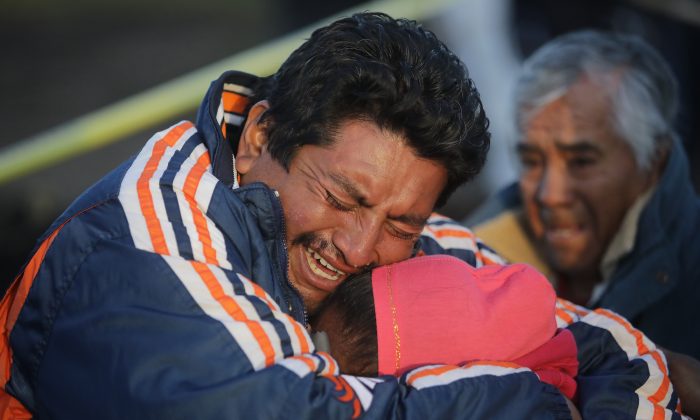 Family members of a victim cry when recognizing the body after an explosion in a pipeline belonging to Mexican oil company PEMEX on Jan. 19, 2019 in Tlahuelilpan, Mexico. (Hector Vivas/Getty Images)
Americas

MEXICO CITY—More than 70 people were killed after a gasoline pipeline blast in central Mexico on Jan. 19. The explosion happened after fuel thieves punctured a hole in the Tula-Tuxpan pipeline and crowds of people came to fill plastic containers with fuel.

The incident has put new focus on the government’s crackdown on fuel theft.

Gas stations across Mexico have been facing shortages of gasoline and diesel after measures taken by President Andrés Manuel López Obrador to fight fuel theft are jamming up distribution systems.

In order to stop the rampant fuel theft that sucks as much as 70 billion pesos ($3.6 billion) a year from the coffers of Pemex, Mexico’s national oil company, López Obrador has shut several key pipelines that carry gasoline and diesel to consumers from refineries and ports. Now, fuel is being delivered by truck, a vastly less-efficient system that is causing massive distribution problems in at least 10 Mexican states.

In the state of Guanajuato, a center for fuel theft, more than 85 percent of service stations were reportedly without fuel last week. Meanwhile, in the Mexico City area, most service stations have at least some gas, but long lines are forming as panicked drivers rush to fill their tanks.

Alejandro Diaz, an employee of the Mexico City government, waited two hours to get to the front of the line to fill up his car Jan. 11. But when he got to the front of the line, gas station employees told him that the station had just been resupplied by a tanker truck, and that they would have to wait another two hours for the gasoline to settle before it could be pumped.

“The people at the top make these decisions, but they don’t consider what happens to us at the bottom,” he told The Epoch Times. “Who knows if there are going to be any benefits?”

In addition to closing pipelines, the federal government has deployed about 5,000 soldiers and police officers to monitor pipelines and distribution centers. López Obrador called the strategy a success in a press conference Jan. 14, noting that the military and police have recovered 4.5 million barrels of stolen gasoline.

Over the past decade, fuel theft, or huachicoleo, as it is known in Mexico, has grown “exponentially” to become one of the major activities of organized crime, according to Guadalupe Correa-Cabrera, professor of political science at George Mason University and author of “Los Zetas Inc.: Criminal Corporations, Energy, and Civil War in Mexico.”

“It has been practiced in certain communities since the last century, but during the Calderon administration it started to become very well structured, very organized, involving cartels and other actors,” Correa-Cabrera told The Epoch Times. “The exponential growth of this business happened during the [former President] Enrique Peña Nieto years, and you can see it in the numbers, that fuel theft exponentially increased.”

For a variety of reasons, Pemex has been losing tens of billions of pesos annually since 2013. But more than 20 percent of those losses can be attributed to the tens of thousands of barrels of gasoline that go missing every day.

For Correa-Cabrera, such massive theft points to high-level corruption, including of Pemex officials, state governments, and the armed forces.

“You cannot do this level of operation without the knowledge of Pemex employees,” she said. “The theft was of such a magnitude that there were so many actors that should have been involved and informed about it.”

Since López Obrador took office, government investigations are starting to reveal the vast corruption networks behind huachicoleo. López Obrador has accused his three predecessors of tolerating fuel theft, and opened a criminal investigation into Leon Trauwitz, a Mexican army general tasked with protecting Pemex under Peña Nieto, for involvement in the crime.

According to government reports, the strategy has already caused a significant decline in fuel theft. But the gasoline shortages are testing Mexico’s economy and patience.

Chambers of commerce have stated that the fuel shortages have already caused 1.25 billion pesos ($66 million) in losses to the economy, and that there could be serious economic fallout if the situation continues this week.

However, the inconvenience so far has not translated into a massive repudiation of López Obrador’s government. According to a poll by newspaper El Financiero, 64 percent of Mexicans think that the shortages are worth it to fight huachicoleo.

Arturo Martinez, a businessman who commutes by car every day to central Mexico City from a southwestern suburb, told The Epoch Times that he waited an hour and 20 minutes to fill up his tank in a line that stretched half a mile and 100 cars on Jan. 11. Although he was frustrated that he had to take time out of his work day to buy gasoline, Martínez, who voted for López Obrador, thinks that the measure is for the best.

“Maybe if they stop people from stealing gasoline, the price will go down, and that will be good for us,” he said. “It’s taking time out of our days, but it’s good that they’re doing it. That’s why we’re enduring it, and not complaining.”