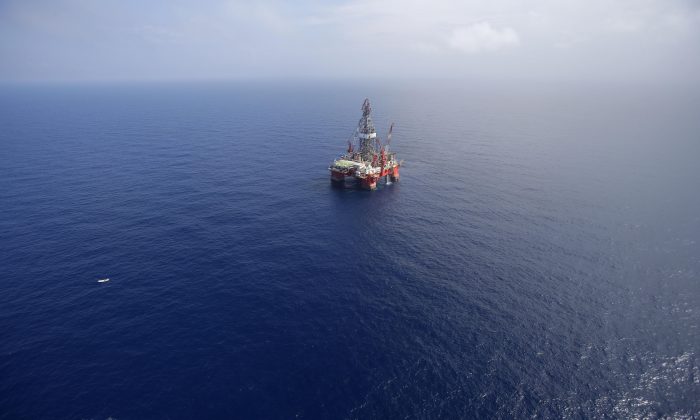 The Centenario deep-water drilling platform stands off the coast of Veracruz, Mexico in the Gulf of Mexico, on Nov. 22, 2013. Mexico's government announced on Thursday, Dec. 11, 2014, the start of bidding for oil exploration rights in 14 areas of the Gulf of Mexico being opened to domestic and international companies as it ends a seven-decade state monopoly on the petroleum business. (AP Photo/Dario Lopez-Mills)
News

MEXICO CITY—The government announced on Thursday the start of bidding for oil exploration rights in 14 areas of the Gulf of Mexico being opened to domestic and international companies as Mexico ends a seven-decade state monopoly on the petroleum business.

Bidding will continue until July 15. Companies wishing to bid must meet a set of requirements, including showing their participation in at least three exploration projects and oil extraction of at least $1 billion and capital on hand of at least the same amount.

Mexico nationalized its oil industry in 1938. Prior to this year’s reforms, the state company Petroleos Mexicanos was the only one allowed to do oil exploration and production.

The parcels up for bid are in shallow water, less than 500 meters (1,640 feet), off the coasts of Veracruz, Tabasco and Campeche states. The areas will be explored through shared production contracts running for 25 years.

Businesses may bid independently or as part of a consortium, but no company can try for more than five blocks. Interested companies will have access for six months to detailed data about each of the parcels through a website.

“Mexico is betting a lot on this audacious opening,” said Energy Secretary Pedro Joaquin Coldwell. “For that reason the Mexican government’s commitment to transparency is crucial.”

Undersecretary of Energy Lourdes Melgar said every contract will include a clause stating that any corrupt practices will lead to cancellation of the deal.

Corruption has cast a long shadow in Mexico since local police in a southern city, allegedly on orders of the mayor, intercepted 43 students from a rural teachers college and turned them over to gang members in late September. The remains of only one have been confirmed, but the government says testimony from people detained in the case indicate they were all slain and their bodies incinerated.

Additionally, cries of a conflict of interest have been aimed at President Enrique Pena Nieto since it was revealed that his wife had bought a mansion from a businessman who had received public contracts. An entity of the same company was also awarded a contract to build a high-speed train, which was subsequently cancelled after the outcry and put out again for bid.

Energy officials said all of the oil contracts will be public to avoid corruption.

Analysts have estimated that investment in the sector could reach $15 billion a year.