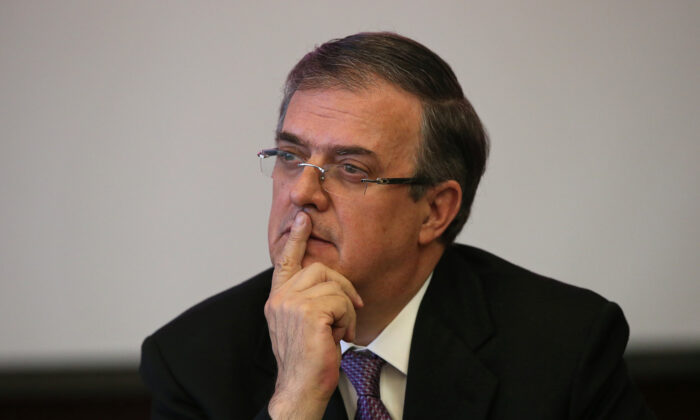 Representatives from the three countries signed the latest version of the deal on Dec. 10 in Mexico City. According to House Democrats (pdf), U.S. lawmakers agreed upon a provision that labor attachés would be based in Mexico and “provide on-the-ground information about Mexico’s labor practices.” The text of the deal released by the U.S. trade representative’s office on Dec. 13 didn’t appear to include the provision, though it was added in a version presented in the House that same day.

Ebrard told reporters it would be up to Mexico whether or not to accept the proposed diplomatic attachés, since countries decide whether to accredit foreign diplomats in their territory.

“The attachés are authorized by Mexico,” Ebrard said at a regular government news conference. “No country can assign attachés in Mexico but us.”

Prior to Ebrard’s comments, Mexico’s President Andrés Manuel López Obrador suggested that the addition of the provision was sneaky, reported The Associated Press, telling reporters, “That was not agreed to, and this comes out in a clandestine way.”

Jesus Seade, Mexico’s undersecretary for North America and trade negotiator, said at a press conference over the weekend that the matter of attachés was not included in the version of the bill signed on Dec. 10 and ratified by Mexico’s Senate two days later, The Wall Street Journal reported.

“Mexico will NEVER accept any measure that would see inspectors disguised for a simple reason: Mexican law prohibits it,” Seade wrote in a series of tweets, some of which were later deleted, adding for emphasis in another one: “NO INSPECTORS.”

Seade traveled to Washington on Dec. 15 to discuss the situation with Robert Lighthizer, the U.S. trade representative. He also sent a letter to Lighthizer, saying Mexican officials are concerned that the United States is trying to go beyond the provisions agreed in the latest version of the bill. He said that U.S. attachés in Mexico wouldn’t be allowed to conduct inspections, citing Mexican law.

“The obsession of Democrats with ‘enforcement,’ a unilateralist term meaning ‘force to comply,’ cost blood, was tended to with the panels,” Seade wrote in the letter. “The legitimate way to enforce, in both countries, is with our respective laws.”

Seade told reporters that the labor attachés would be “unnecessary and redundant.”

Lighthizer replied to Seade in a letter on Dec. 16, telling him that it’s “typical” for U.S. embassies in foreign capitals to house attachés, and the U.S. Embassy in Mexico presently houses attachés from over 12 federal agencies. Mexico also has attachés stationed in the United States.

“The Administration included language in the USMCA implementing legislation authorizing up to five attachés from the Department of Labor to work with their Mexican counterparts, workers, and civil society groups on implementation of the Mexican labor reform, including by providing technical assistance and disbursing capacity building funds, and provide assistance to the new U.S. government interagency labor committee,” he wrote.

“These personnel will not be ‘labor inspectors’ and will abide by all relevant Mexican laws. As you know, the USMCA’s first-of-its-kind, facility-specific, rapid-response mechanism allows an independent, three-person panel chosen by both Parties to request on-site verifications in any of our three countries when there are good faith questions about whether workers at a particular facility are being denied key labor rights. But those verifications will be conducted by the independent panelists not by the labor attachés.”

“USMCA is a great agreement for the United States and Mexico. I look forward to working with you and your colleagues to ensure that the agreement enters into force as quickly as possible.”