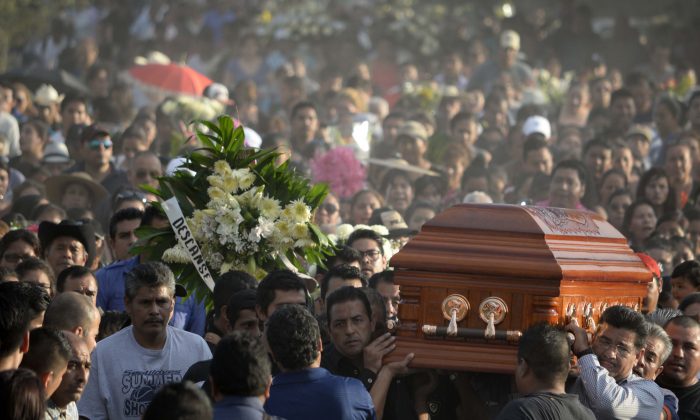 Mourners carry the coffin of slain mayor of Temixco, Gisela Mota, to the cemetery in Pueblo Viejo, Mexico, on Jan. 3, 2016. Mota took office as mayor of the city of on Jan. 1 and was shot at her home on Jan. 2. The governor of the southern Mexican state of Morelos says the killing of the mayor was a warning by drug gangs, meant to convince other officials to reject state police control of local forces. (AP Photo/Tony Rivera)
Americas

MEXICO CITY—A member of the gang that killed a mayor in southern Mexico revealed the site of clandestine graves holding the remains of four other people, prosecutors said Tuesday.

An official of the prosecutors’ office in the southern state of Morelos said investigators have found four bodies in two pits in a rural area.

The official spoke on condition of anonymity because he or she was not authorized to be quoted by name.

The suspect was not named because he is a minor. He was arrested with two other people in the Saturday killing of the mayor of city of Temixco, south of the Morelos state capital of Cuernavaca. The suspect told police he belongs to the Rojos drug gang that apparently killed and buried the four men, who remain unidentified.

The official said the father of Mayor Gisela Mota described the killing, which occurred at the family’s home.

A group of armed assailants burst into the house of Mayor Gisela Mota and asked her family which one of them was the mayor. “Mota answered ‘that’s me,’ and that’s when they shot her,” the official said.