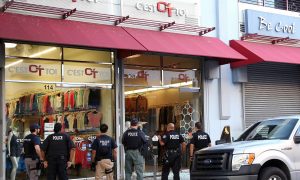 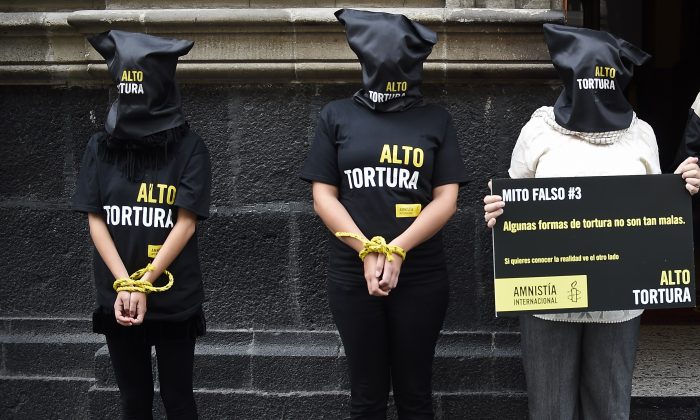 Activists of Amnesty International demonstrate against torture in Mexico, before submitting to the press a report titled “Out of control: Torture and other ill-treatment in Mexico” in Mexico City on Sept. 4, 2014. (Ronaldo Schemidt/AFP/Getty Images)
Opinion

Mexico Lives Under the Shadow of Torture

Mexico is one of the most violent countries in the world today. When Mexican film director Alejandro Gonzalez Iñarritu received the two most coveted prizes in the film industry, the Oscars for Best Director and Best Picture he said, “I pray so that we may find and build the government we deserve.” It was a strong criticism not only of Mexico’s present government but of all Mexican governments that for decades have let the generalized use of torture take over the country.

“Torture and ill-treatment in the moments following detention and before detainees are brought before a judge are generalized in Mexico and occur in a context of impunity,” said Juan Mendez, the U.N. special rapporteur on torture, in a recent special report on the situation in Mexico. Mendez called on the Mexican government to stop using army personnel in security operations.

Torture techniques such as near-asphyxiation, beatings, mock executions, sexual violence, death threats, and electric shocks have been reported consistently from different parts of the country.

Reports of torture and ill treatment significantly increased after 2006, as a result of the government’s “war on drugs.” In September 2014, Amnesty International reported that torture and other ill treatment was out of control in Mexico, with the number of complaints 600 percent higher in 2013 when compared to those that were reported in 2003.

Impunity for torturers is rife in Mexico. According to the Federal Judicial Council, federal courts dealt with 123 prosecutions for torture between 2005 and 2013, but only seven of those resulted in convictions under federal law. As a result of this climate of impunity, fear of torture is widespread among Mexico’s civilian population. An Amnesty International study showed that 64 percent of Mexicans are scared of being tortured if taken into custody.

The causes of impunity are as varied and complex as the means to fight against it, and the lengthy administrative detention of suspects contributes to this impunity.

Complaints of torture are frequently dismissed not only by prosecutors but also by official medical experts and even human rights commissions, reports Amnesty International. It has been estimated that only 1 in 20 alleged victims who complain to the National Human Rights Commission are given an official forensic examination by the Federal Attorney General’s Office. Only one in eight of those forensic examinations finds clear and convincing evidence of torture.

People who are picked up by the police can be held in detention for a long time before being charged of any crime. Between 2008 and 2013, 8,595 people were held in up to 80-day pre-charge detention (called arraigo in Mexico) by the Federal Attorney General’s Office. During that time, detainees run the risk of being tortured.

“The practice of arraigo contradicts some of the most sacred principles of Mexico’s Constitution, such as freedom from arbitrary detention, gives prosecutors a perverse incentive to deprive people of their liberty before thoroughly investigating them, and undermines basic safeguards against torture,” said José Miguel Vivanco, Americas director of Human Rights Watch. Although the government has reduced the number of arraigo detentions, it has not yet outlawed it.

In the meantime people continue to be missing or disappeared in Mexico, as happened notoriously with 43 students who are believed to have been murdered and whose case has not yet been solved. As recently as August 2014, federal officials acknowledged that more than 22,000 people were missing or disappeared in Mexico. In some cases, public officials have been implicated in those disappearances.

Those cases of torture, forced disappearances, and ineffectual application of law paint a tainted picture of the human rights situation in Mexico. The call for the Mexican authorities to take effective steps has never been more urgent, no matter how repetitive it may sound.

Dr. César Chelala is a winner of an Overseas Press of America award. He writes extensively on human rights issues.