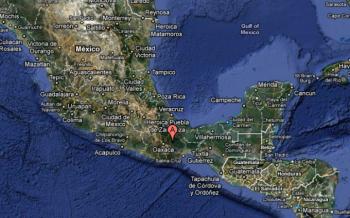 Mexcio Landslide: Many are feared dead after heavy rains prompted a landslide in the town of Santa Maria Tlahuitoltepec in the state of Oaxaca. (Screenshot from Google Maps)
US

By Natalie Gee
Print
A landslide in the southern Mexico state of Oaxaca has buried at least 100 homes, according to official reports.

There are no confirmed deaths, but 11 people are missing, according to Mexican officials.

The incident took place after a hillside in the rural town of Santa Maria Tlahuitoltepec 130 miles southeast of Mexico City collapsed, following major storms and downpours.

Oaxaca state Governor Ulises Ruiz said in an interview on Radio Formula that the previous figure of seven confirmed deaths was incorrect, according to Bloomberg news.

Rescue attempts by survivors have proved difficult, as the large quantities mud muffled any shouts that might have helped to locate buried victims.

“We are in a serious risk situation,” said local official Donato Vargas, reported the Guardian. “In all of our neighborhoods there are houses and roads cracked and about to fall.”

“All we have is this satellite phone [because] the roads are shut down.”

He said rescue crews still had not arrived eight hours after the slide, and another hillside may also collapse, endangering a nearby community of 9,000.