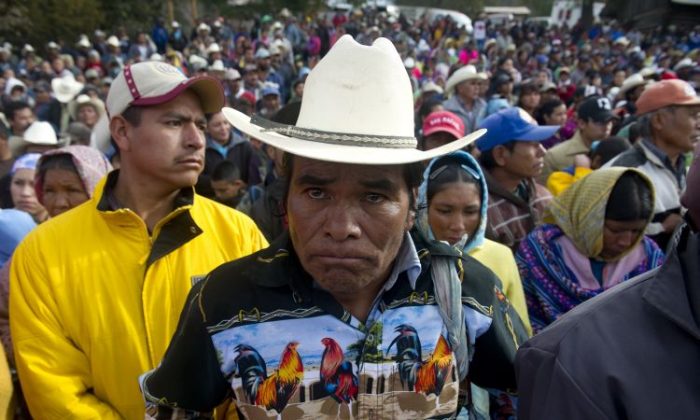 Raramuris indigenous people gather to receive humanitarian aid from the Mexican Red Cross in Mexico on Jan 21. With natural disasters causing devastating financial tolls around the world, Mexico is investing hundreds of millions in preventive measures against them. (Yuri Cortez/AFP/Getty Images)
US

With natural disasters exacting devastating financial tolls around the world, Mexico is investing hundreds of millions in preventive measures against drought and climate change.

The World Bank has given Mexico a loan worth about $300 million, according to the Latin American Herald Tribune newspaper, citing the Mexican Social Development Secretariat.

The package is expected to benefit about 2,000 rural indigenous communities, who will receive emergency supplies of food and water if affected by drought, the secretariat said. Measures will be put in place to improve “risk management for infrastructure and services while restoring forests, wetlands and other ecosystems.”

The Mexican government also announced it is investing nearly $250 million in insurance against climatic disasters, the Sagarpa agricultural agency said in a statement.

The investment will mainly protect some 150,000 farmers and ranchers across the country, and represents a tripling of the same budget compared to last year.

Mexico has been suffering a drought since May 2011 affecting 19 of the 32 states.

According to a recent assessment by the World Bank, Mexico is vulnerable to a variety of natural hazards, including earthquakes, floods, volcanoes, and hurricanes.

Last year, Mexico purchased more than $400 million in disaster insurance to protect against earthquakes and hurricanes, and mainly encompassed low-cost housing and public infrastructure. At the time, the government said it is the largest ever purchase of insurance by an emerging economy.

Mexico suffered two devastating earthquakes in 1985 measuring 8.0 and 7.5 on the Richter scale. Together they killed over 10,000 people and destroyed 100,000 homes.