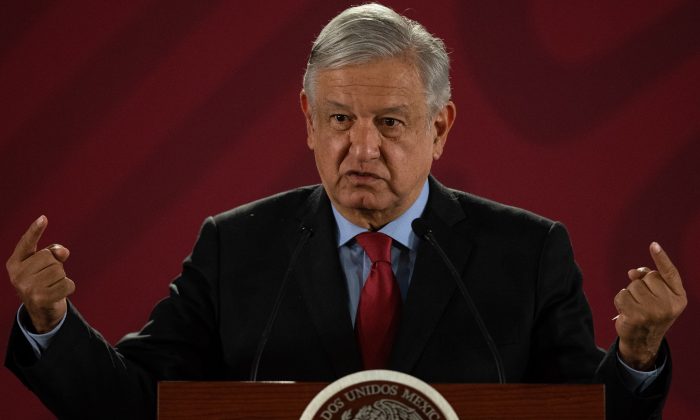 Mexican President Andrés Manuel López Obrador said that Mexico has to regulate the flow of migrants from Central America who travel through Mexico to cross into the United States illegally after U.S. President Donald Trump on March 29 threatened to shut the border.

“Obviously, we have to help because Central American migrants pass through our territory and we have to bring order to this migration, make sure it’s legal,” Obrador said on April 1. “That’s what we’re doing. But serenely, calmly, without a commotion and with great prudence and responsibility.”

Trump has threatened several times to close down the border, which would choke the flow of people and goods between the two countries, dampening trade. However, it would hurt Mexico substantially more, as 80 percent of Mexican exports go to the United States.

“Mexico must use its very strong immigration laws to stop the many thousands of people trying to get into the USA,” Trump said in a March 30 tweet. “Our detention areas are maxed out & we will take no more illegals. Next step is to close the Border! This will also help us with stopping the Drug flow from Mexico!”

Mexico must use its very strong immigration laws to stop the many thousands of people trying to get into the USA. Our detention areas are maxed out & we will take no more illegals. Next step is to close the Border! This will also help us with stopping the Drug flow from Mexico!

He expressed similar sentiment the day before, urging Mexico to stop two large caravans of migrants traveling north from Guatemala.

“Mexico is tough. They can stop them, but they chose not to. Now they’re going to stop them. And if they don’t stop them, we’re closing the border. We’ll close it. We’ll keep it closed for a long time,” he said. “I’m not playing games.”

López Obrador said he would not have a confrontation with the United States.

Commissioner of U.S. Customs and Border Protection (CBP) Kevin McAleenan said on March 27 that the border security system has reached its “breaking point,” estimating the agency would conclude the month with some 90,000 caught trying to cross the border illegally—up more than 140 percent from 2018 and the most since 2008.

The overcrowding of CBP facilities has caused the agency to start directly releasing some migrants caught at the border, instead of transferring them to Immigration and Customs Enforcement, which doesn’t have sufficient detention capacity to accept them.

This was the first time in more than a decade that the CBP has had to directly release its detainees and is trying to pick those with the lowest risk, McAleenan said.

Trump has been putting pressure on Mexico and the Central American countries of Honduras, Guatemala, and El Salvador to stop the migrant flow. The U.S. State Department confirmed on March 30 it has stopped aid to the three countries of the so-called Northern Triangle after Trump repeatedly warned them he would do so if they fail to stem the migration.

…..Honduras, Guatemala and El Salvador are doing nothing for the United States but taking our money. Word is that a new Caravan is forming in Honduras and they are doing nothing about it. We will be cutting off all aid to these 3 countries – taking advantage of U.S. for years!

Mexico began issuing temporary humanitarian visas to some members of a migrant caravan in southern Mexico, giving priority to children and the elderly, the National Migration Institute said April 1. It said it would provide transport back to Central American countries, Cuba, and Haiti, on a voluntary basis.

Earlier this year, Mexico handed out humanitarian visas liberally, but reined in the program after a surge in applications. The institute said that, starting in April, Mexico would encourage people to apply for visas in their home countries.

It was not immediately clear if the government will limit the number of visas it issues.