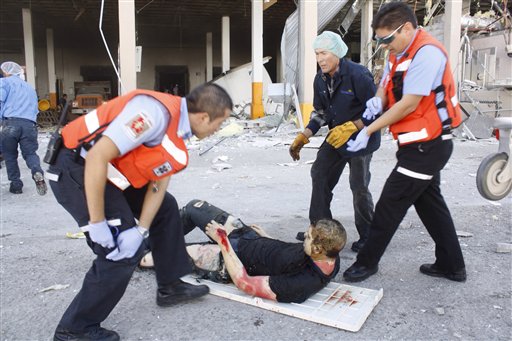 A boiler blast at the Blueberry factory in Ciudad Juarez, Mexico, left 40 people injured, one person dead, and others missing.

The blast was described by the AFP news agency as “huge,” taking place on the factory’s second floor. Around 300 people were working at the facility at the time.

“We are searching for people in the debris. We calculate 20 have disappeared,” Juarez government spokesman Guillermo Terrazas told the news agency. Some of those have been located, authorities said later

Ciudad Juarez Civil Protection Director Fernando Mota said firefighters found a body inside and that six of the at least 40 injured are in serious condition. Several workers are missing and could be trapped inside the building, located in this city across the border from El Paso, Texas, he added.

Ten of the injured workers were in serious condition. Another four were described as being in critical condition.

“There is an area which (rescuers) were not able to get to because they are working to control the fire sparked by the damaged boiler,” Motta continued.

Three dozen ambulances were dispatched to the scene, reported KTSM-TV based in Texas.

The station reported that the blast caused the second floor of the factory to collapse.

The Dulces Blueberry factory, located at Calle Magneto No. 1810 in the “Benito Juarez” Industrial Park area, is owned by a U.S. firm.

People could smell acid in the area where the explosion occurred and that a steam boiler had been installed there recently, said factory worker Ismael Bouchet.

“Since the morning, several co-workers said there was a bad smell, that it smelled of acid and because it was a new area we thought it was normal,” Bouchet said.

He said he saw several people with bone fractures and burns.

“I was able to help five people who walked out of the building but as soon as they were out they went into shock and fainted,” he said.

Photographs of workers being helped by paramedics showed people with injuries that resembled chemical burns.