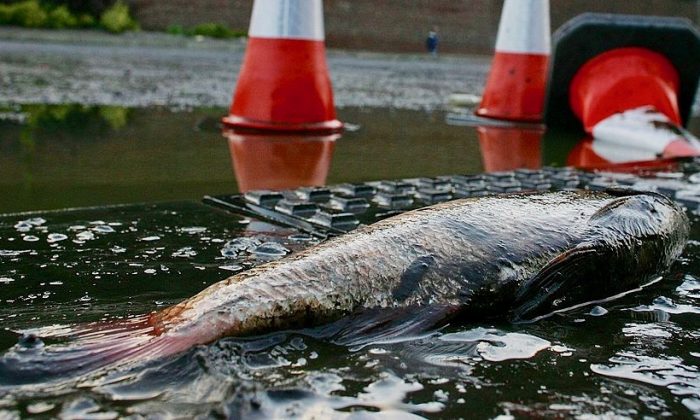 Residents saw fish falling from the sky in northeastern Mexico.

On Sept. 26, small fish rained down along with a light spray of water in the city of Tampico. Civil protection director for the state of Tamaulipas, Pedro Granados, received reports of the strange phenomenon from residents. According to Granados, the event was weird but not overwhelming, NPR reported.

“Not to say there were a lot of fish—one here, one there,” Granados told AztecaNoreste. “It has to be said, they’re very small fish, which weigh a few grams. It’s strange, not normal.”

He explained that Mexico is experiencing a lot of unusual activity these days. He makes reference to the recent series of earthquakes that Mexico is still recovering from.

“I don’t know if it’s climate change,” said Granados, “but we’ve had tornadoes, storms, rains, floods, raining fish, eclipses, earthquakes, all kinds of natural phenomena that we aren’t used to, but that we are experiencing these days.”

Although it is not a normal occurrence, the phenomenon is not unheard of. There have been past reports of raining frogs, fish, and even shrimp. A New York Times article talks about an impoverished town in Honduras that receives a fish rain at least once a year, becoming the only time the residents have access to seafood. The residents credit divine sources for the fish storms. They even hold festivals in celebration and crown a lucky young woman “Miss Fish Rain.”

A 2014 fish rain in Sri Lanka allowed villagers access to copious amounts of small, edible fish, BBC reported. The fish were very fresh, too. Some of the fish were still alive after they hit the ground, adding further questions to the phenomena.

Other incidents, even those from the 1600s, are detailed in a Newsweek article. The article talks about fish rains from even extremely early times, like Roman fish rains in the first century.

Scientists pin the phenomenon on sea life being lifted out and thrown huge distances from seas by waterspouts. A waterspout is like a tornado that forms over bodies of water. Waterspouts and sea life are the inspiration behind “Sharknado.”

According to the Newsweek article, the most famous occurrence was the 1947 Great Fish Fall of Marksville, when fish as long as 9 inches fell from the sky over Louisiana.