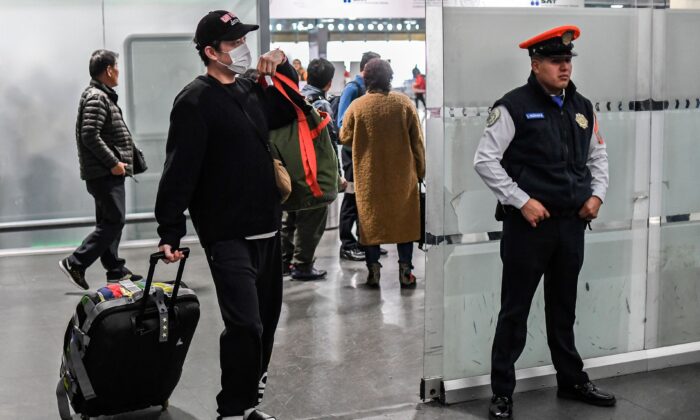 A man wears a protective mask against the spread of coronavirus as he arrives at the Mexico City International Airport in a Jan. 29, 2020, file photograph. (Pedro Pardo/AFP via Getty Images)
Americas

Two patients tested positive for the new COVID-19 virus in Mexico, authorities announced at a press conference in Mexico City on Friday.

One of the patients is in Mexico’s capital and the other is in the northern state of Sinaloa, Mexico’s assistant health secretary, Hugo Lopez-Gatell, said. Authorities are testing the second patient again but treating the case as confirmed.

At least five family contacts of the first patient have been placed in isolation. He said one of the men had contact with someone who had traveled to the northern Italian region where there has been an outbreak.

Italy has reported a rapid increase in confirmed cases this week, especially in the northern Lombardy region.

At the press conference in Mexico, President Andrés Manuel López Obrador appeared to downplay the seriousness of the COVID-19 virus, saying “it isn’t even equivalent to flu.”

Symptoms of the new virus are similar to influenza, but international health experts noted in a report published Feb. 28 that the new virus “is highly contagious” and “can spread quickly.”

“It is not SARS and it is not influenza,” the experts added in the joint World Health Organization-Chinese report. The new virus “is unique among human coronaviruses in its combination of high transmissibility, substantial fatal outcomes in some high-risk groups, and ability to cause huge societal and economic disruption,” they emphasized.

The new cases in Mexico were the first confirmed between the United States and Brazil, which confirmed its first case earlier this week.

That patient returned from Italy, Brazilian authorities said. Nigeria reported its first case on Friday, an Italian man who works in the country and recently visited his home country, officials said. Other countries have reported new cases this week linked to Iran, Italy, and China.

The virus first emerged in China in late 2019 and spread quickly across the country. New cases appeared in other countries early this year. New Zealand officials said Friday that they had the first confirmed case, marking the 48th nation where the virus had spread. That patient traveled to Iran, they said.

Mexico’s announcement came later, making the country at least the 49th with one or more patients who tested positive for COVID-19.

Experts say people can best avoid getting infected with the new virus by frequently washing hands with soap and water for at least 20 seconds, maintaining a distance of at least six feet from other people, and not touching one’s nose, eyes, and mouth with unwashed hands. People who start displaying symptoms should stay at home and contact their health provider or health authorities.