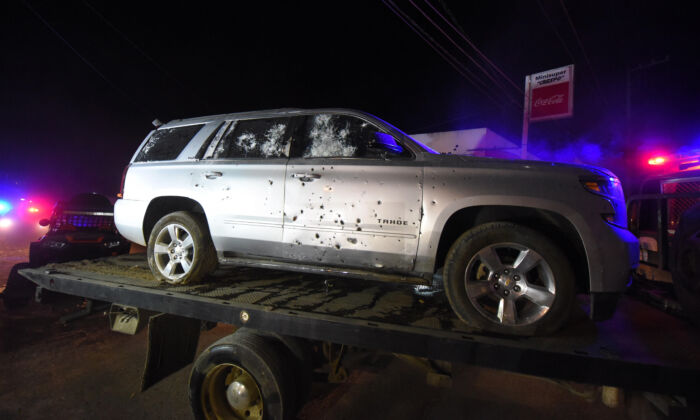 A bullet ridden sports utility vehicle is taken away by authorities after a gun battle with Mexican Marines in which a suspect identified by authorities as the leader of the Beltran Leyva cartel, Juan Francisco Patron Sanchez and several accomplices died in the exchange, in Tepic, Nayarit state, Mexico on Feb. 10, 2017. (AP Photo/Chris Arias)
International

MEXICO CITY—An alleged regional leader of the Beltran Leyva drug cartel and 11 accomplices have been killed in clashes with Mexican marines who poured gunfire into a house from a helicopter-mounted machine gun.

The federal Interior Department said via Twitter that Juan Francisco Patron Sanchez headed the cartel’s operations in the Pacific coast state of Nayarit and in the southern part of Jalisco state. The Navy official identified the dead capo by the criminal nickname “H2.”

A Mexican Navy official who was not authorized to be quoted by name said Friday that Patron and seven accomplices had opened fire on marines and had barricaded themselves in the upper part of a house in the Nayarit state capital of Tepic.

The official said that a helicopter gunship had been called in to provide “dissuasive fire,” to suppress outgoing gunfire from the structure on Thursday.

Use of such “minigun” weapons from a helicopter gunship is extremely rare in urban areas. They apparently have been used before by Mexican police, but usually only in rural areas.

The Navy said the helicopter gunship was used in accordance with its rules of engagement, “with the aim of reducing the level of aggression and reducing the risk of civilian or federal casualties.”

The Navy said that a grenade launcher and several rifles and pistols were found at the scene.

The Navy said a second gunbattle occurred soon afterward near the Tepic airport, when federal forces came under attack from gunmen. They returned fire, killing four members of the same cartel.

The Beltran Leyva cartel has been active in the northern state of Sinaloa and the southern state of Guerrero. It has since purportedly expanded into other states, and may have allied itself with Mexico’s fastest-growing gang, the Jalisco New Generation cartel.