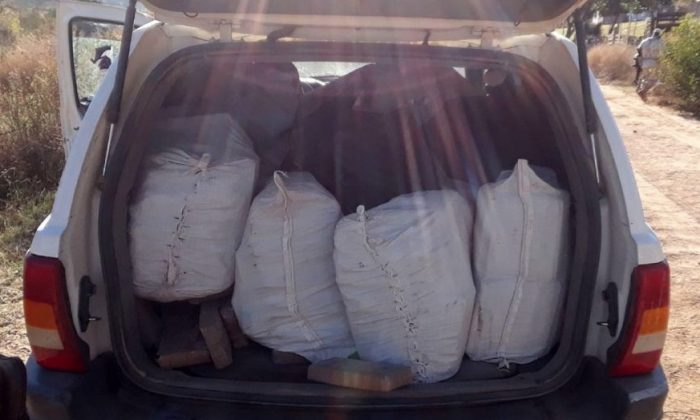 Over half a ton of illegal drugs discovered by police in Ensenada, Baja California, Mexico. (Policía Federal de México)
Americas

Mexican police have discovered over half a ton of drugs stuffed in an SUV, including enough fentanyl to kill over 22 million people.

Mexican federal and military police stumbled upon the shipment when they stopped an SUV on a highway in Ensenada, Baja California, for driving without the front license plate, the police stated in a Jan. 25 release.

The vehicle was stuffed up to the roof with 620 packages, including over 914 pounds of crystal meth, some 100 pounds of fentanyl, almost 88 pounds of cocaine, and over 15 pounds of heroin.

The driver of the car was arrested.

Ensenada is about an hour-and-a-half drive from the American border. The drugs were most likely heading that way.

Fentanyl is an extremely potent synthetic opioid about 50-100 times stronger than morphine. Only 2 milligrams, the equivalent of two grains of salt, are usually enough to kill a person, according to the U.S. Drug Enforcement Administration. That means the 100-pound shipment would be enough to kill over 22 million people—the entire state of Florida.

Singer and musician Prince died of a fentanyl overdose in April 2016 and after musician Tom Petty’s overdose death, fentanyl and oxycodone were found in his system.

Fentanyl is used as an anesthetic. But it is often shipped illegally from China and Mexico, and drug dealers are using it to spike heroin. Fentanyl-related deaths have increased almost sevenfold since 2013, making it now the biggest killer drug and a major contributor to the opioid epidemic in the country.