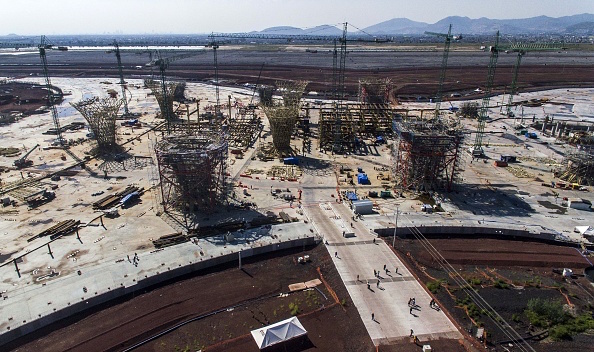 The Mexican peso climbed as investors grew confident that President Andres Manuel Lopez Obrador will solve a standoff with airport bondholders that had roiled markets.

The peso gained 1.2 percent to a six-week high on Dec. 20 after news that a majority of bondholders accepted Mexico’s offer to buy back $1.8 billion in debt used to fund the construction of an international airport that Lopez Obrador has said he’ll cancel.

Closing a deal was seen as key to investors as the deadlock had been pressuring Mexican markets since the Lopez Obrador administration decided to dismantle the $13 billion airport project following a public consultation in late October. Bondholders had initially rejected the deal until the Finance Ministry sweetened the offer last week. According to the Finance Ministry, this time there was “overwhelming” acceptance by bondholders, which will allow the government to avoid a mandatory repayment of all $6 billion in bonds that would have been triggered by the cancellation of the airport.

“It is a step in the right direction,” said Jan Dehn, the head of research at Ashmore Group Plc in London. ” Lopez Obrador had a poor start in terms of creating confidence. He did not appear to show leadership on key issues, but after the budget and now this airport bond dispute he is winning back some trust.”

While the deal was a major victory for the new administration as it wards off a potentially nasty battle with bondholders, it comes at a steep price. The government will now spend $1.8 billion—an amount which came from an existing trust for the airport’s construction—in an expensive buyback. There is no indication of what will be done with the partially-completed project in Texcoco, which as of now has zero value.

The improved offer, capped at $1.8 billion of $6 billion outstanding, includes a buyback price of par plus accrued and unpaid interest. It was oversubscribed in all four of the bond series outstanding, according to a person familiar with the transaction, who asked not to be named as he is not authorized to speak publicly on the matter. Over 70 percent of bondholders participated in the consent, according to the person.

In a Dec. 20 press conference, the new president said that the bond deal cleared the way for development of nearby military airport Santa Lucia, which will serve as a second airport hub for Mexico City. He said the next steps would be to deal with holders of a Fibra E—a REIT-like instrument unique to Mexico—and contractors for the Texcoco project.

“This was because of a responsible attitude from investors, and for us it means the fulfilment of all our promises. It was very good,” Lopez Obrador told reporters. “Now comes the Fibra and a deal with the contractors, but this was the most complicated part.”

Lopez Obrador scrapped the project after a widely-criticized referendum organized by his own party. Situated in the Mexico City suburb of Texcoco, northeast of the capital, the new airport was slated to replace the cramped and aging Benito Juarez International Airport, Latin America’s busiest last year. The airport became a lightning rod during this year’s presidential campaign as Lopez Obrador vowed to cancel the project that’s more than a third of the way to completion.

Now, the administration will stand by its proposal to add two runways to the Santa Lucia military base while upgrading the current airport in the neighboring city of Toluca. Construction at the Texcoco airport is continuing while Lopez Obrador’s team negotiates with creditors.

While the market is taking the project as a positive sign, the repercussions of Lopez Obrador’s win may be felt further down the line. The president has now used public consultations on 11 proposals, including a Mayan train project and a new refinery in Lopez Obrador’s home state of Tabasco. Some investors worry that the win may only embolden the government.

“It’s another step away from policy predictability,” said Roger Horn, a senior emerging markets strategist at SMBC Nikko Securities America in New York. “While it’s probably good that this issue is resolved, the unfortunate thing is that the government will take this as a big win, creating an incentive for them to throw their weight around with investors.”

In addition to the bonds, another $1.6 billion in funding came from an initial public offering of Fibra E shares—a hybrid between a master-limited partnership and a real estate investment trust. The Fibra E shares were bought mostly by billionaire Carlos Slim’s Operadora Inbursa through its pension fund.