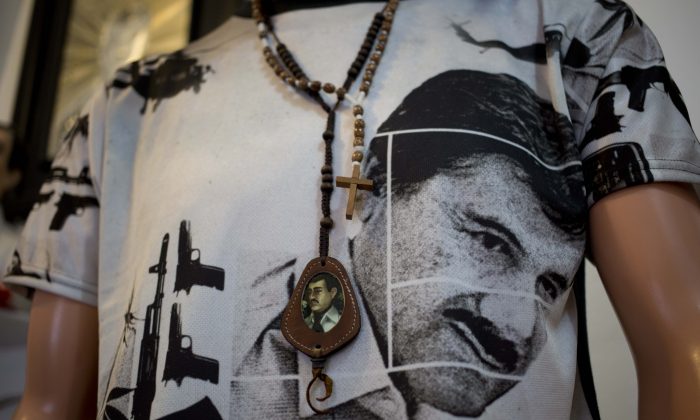 A T-shirt of fugitive Mexican drug lord Joaquin "El Chapo" Guzman covers a mannequin representing Jesus Malverde, known in Mexico as the "saint" of drug traffickers, inside the shrine of a faith healer in Mexico City, on Oct. 16, 2015. The government is offering a reward of 60 million pesos (about $3.5 million) for Guzman's recapture after he made his second escape from a maximum security prison through an underground tunnel in 2015. (AP Photo/Eduardo Verdugo)
Americas

MEXICO CITY—The pursuit of escaped drug lord Joaquin “El Chapo” Guzman in recent weeks moved into the mountains of northwestern Mexico and officials think he injured a leg and his face in evading capture, the government said late Friday.

In a statement, Mexico’s security Cabinet provided no details on when or exactly where the operation took place. It said efforts to recapture Guzman have been continuing since his daring July 11 escape from his cell through a tunnel dug under the maximum security prison where he was being held not far from Mexico City.

The government cited information-sharing with international agencies for recently leading its hunt for Guzman to northwestern Mexico.

Guzman evaded capture for years in the rugged mountains of Sinaloa state. He previously escaped from another maximum security prison in 2001.