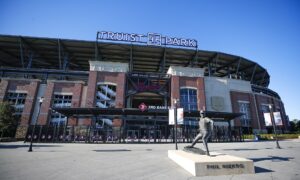 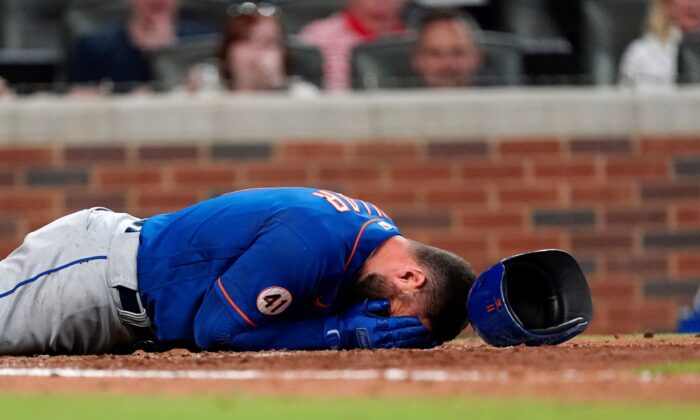 New York Mets' Kevin Pillar lies on the ground after being hit in the face with a pitch from Atlanta Braves pitcher Jacob Webb in the seventh inning of a baseball game in Atlanta, Ga., on May 17, 2021. (John Bazemore/AP Photo)
Baseball

Both teams from New York are away this week and each one is having a painful road trip.

After arriving in Atlanta, the Mets placed outfielder Michael Conforto and second baseman, Jeff McNeil, on the 10-day injured list Monday with strained hamstrings. The two were hurt in Sunday’s loss at Tampa Bay.

Then starter Taijuan Walker exited early against the Braves with tightness in his left side, and outfielder Kevin Pillar was hit square in the face by a 95 mph fastball from reliever Jacob Webb. Blood poured from Pillar’s nose in a frightening scene, but he was escorted off the field under his own power with towels covering his face.

After a 3–1 win, Mets manager Luis Rojas said Pillar was taken to the hospital for a CT scan. Pillar then provided an encouraging update on his Twitter account.

“Thanks to everyone that has reached out! Scary moment but I’m doing fine!” he posted.

Meanwhile, the Yankees put slugger Giancarlo Stanton on the 10-day injured list, retroactive to Friday, before their series opener at Texas because of a left quadriceps strain. In addition, reliever Zack Britton had a potential setback in his recovery from elbow surgery.

Stanton was held out of all three games during a weekend series in Baltimore. The 2017 NL MVP is hitting .282 with nine homers and 24 RBIs in his 33 games this season.

“Hopeful that, especially when we can backdate a few days, that coming out of the off day we’ll be all right, and hopefully just put this behind us entirely,” Yankees manager Aaron Boone said. “As much as he wants to be out there, I think he also realized that if it’s something he pushed through, it could turn into a longer-term situation.”

Boone said Britton was dealing with some general soreness after his one-inning simulated game Saturday with Triple-A Scranton/Wilkes-Barre, when he threw to hitters for the first time. Boone said the lefty’s planned rehab start for Double-A Somerset on Wednesday might get pushed back a couple of days.

Britton is on the 60-day injured list after surgery on March 15 to remove a bone chip from his elbow.

Yankees center fielder Aaron Hicks was put on the 10-day injured list Sunday, retroactive to Thursday, after tearing a tendon sheath in his left wrist. Hicks is back in New York getting treatment.