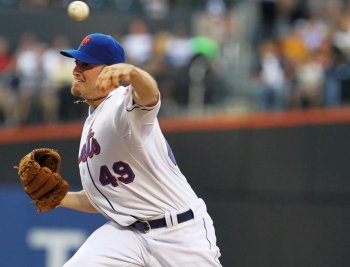 Jon Niese had a sixth inning to forget against the Marlins on Thursday after a superb start. (AFP/Getty Images)
Baseball

The loss was especially tough because the Mets lost shortstop Jose Reyes to injury in the second inning and got out to a 4–0 lead by the third inning against Marlins starting pitcher Anibal Sanchez.

Sanchez (11–8) struggled from the mound for the Marlins in five innings. He gave up nine hits for four runs and walked every Mets lead-off batter he faced.

In contrast, Mets starting pitcher Jon Niese (8–6) had a great start. The lefty struck out six and didn’t give up a hit until the fourth inning when the Marlins brought the score to 4–2 from a two-run homer by Hanley Ramirez.

Ramirez’s offensive jumpstart didn’t bode well for Niese, and was followed by a crushing seven-run sixth inning. Three runs came against Niese before he was replaced by Elmer Dessens, who gave up four more.

David Wright got the Mets on the board in the first inning with a two-run homer after Carlos Beltran hit a line-drive single with two outs.

The Mets loaded the bases in the second inning with one out, and Angel Pagan sent in another run on a fly ball double after Reyes exited the game with injury.

Sanchez got sloppy in the third inning, with back-to-back walks to Wright and Ike Davis followed by a single by Jeff Francoeur, which sent Wright in for his second run and the Mets’ fourth.

Then Sanchez hit Josh Thole to load the bases again, this time with no outs.

But Sanchez got out of the third inning without any more damage.

At the top of the sixth inning disaster struck for the Mets.

Niese ran into trouble right from the start, hitting Morrison in the leg, then giving up a single to Carlos Beltran, and a line drive double to Dan Uggla with Morrison scoring.

Niese then walked Gaby Sanchez to load the bases before getting the first out, a strikeout.

Mets right fielder Francoeur followed up the strikeout with an amazing sprinting catch on a sacrifice fly by Wes Helms that allowed one Marlins run to make it in.

But on the next play a ground-rule double by Brett Hayes sent in the third run of the inning against Niese.

Elmer Dessens relieved Niese after that, but the veteran didn’t fare any better, giving up two singles and a double to send in four more Marlins batters before the inning was said and done. The double came from Morrison, his second hit and RBI of the night.

The Marlins scored two more runs against the bewildered Mets in the ninth inning, and Marlins closer Jose Veras ended the game with a three up, three down inning.

The Mets have hovered around the .500 mark for weeks now and their playoff hopes are virtually nonexistent with just five weeks to go in the season.

The Mets sit 10 games back of the Atlanta Braves and remain in fourth place in the NL East, with the Marlins in third.