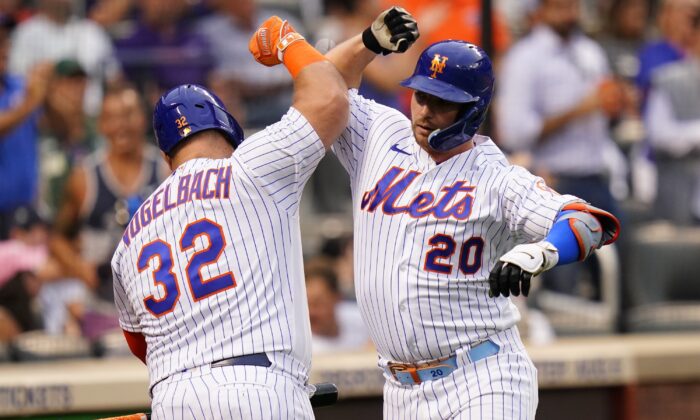 NEW YORK—Starling Marte singled home the winning run in the bottom of the ninth inning, and the New York Mets beat the crosstown Yankees 3–2 on Wednesday night for a two-game sweep of their Subway Series.

Max Scherzer was marvelous on his 38th birthday, striking out Aaron Judge three times to help the Mets take a 2–0 lead into the eighth. Gleyber Torres tied it with a two-run homer off inexperienced reliever David Peterson, normally a starter.

Less than an hour after the game, the slumping Yankees boosted their lineup by acquiring outfielder Andrew Benintendi from the Kansas City Royals in a trade for three minor leaguers.

“It’s another great hitter,” manager Aaron Boone said. “Benintendi’s a great hitter. Gets on base at a really high clip, hits from the left side, so yeah–gives you some balance … I’ll be excited to write his name in.”

Pete Alonso homered early off Domingo Germán, and Francisco Lindor had an RBI single for the Mets before a sellout crowd at Citi Field.

Eduardo Escobar doubled on the first pitch from Wandy Peralta (2—3), who entered in the ninth on his 31st birthday. Escobar advanced to third on a sacrifice bunt by Tomás Nido, who doubled and scored earlier.

Escobar held at third when Brandon Nimmo reached on an infield single that a lunging Peralta was unable to corral cleanly. Marte then ripped a line drive into left field over a drawn-in infield to give the Mets their ninth walk-off win against the Yankees.

The Mets extended their NL East lead to three games over Atlanta with their seventh victory in the last nine meetings against the Yankees. This series marked only the second time the city rivals were both in first place when they squared off—the other came in April 2015.

With the Mets’ win on this night, the Empire State Building in Manhattan was set to be lit in blue and orange all night.

The teams will play two more times this season in late August at Yankee Stadium.

Scuffling through an extended stretch for the first time all year, the AL East-leading Yankees finished a 2–5 road trip coming out of the All-Star break. They’ve dropped 10 of their last 15 games.

Judge, who leads the majors with 38 home runs, fanned three times on sliders from Scherzer. The first came with two on to end the third, and the last with runners at the corners to finish the seventh.

With chanting fans of both teams on their feet in the crowd of 43,693 and sensing the big moment, Judge fouled off the only fastball he saw—a 97 mph heater that was Scherzer’s hardest pitch of the night.

Then he whiffed on an 86 mph slider down and away, the 99th and final pitch from Scherzer. The three-time Cy Young Award winner walked coolly off the mound before emphatically slapping high-fives with teammates in the dugout.

Scherzer also pitched out of trouble in the fifth, when DJ LeMahieu lined out to shortstop with two on, and sixth, when a frustrated Josh Donaldson slammed down his helmet after grounding out to the pitcher on a slider with runners at the corners.

Yankees: RHP Michael King had surgery on his fractured right elbow. Boone said the team probably won’t know for at least a couple of months whether to expect King back for spring training next year.

The fracture will need eight to 10 weeks to heal before doctors can properly determine whether there was ligament damage, Boone said. …RHP Luis Severino (right lat strain) hasn’t started throwing again yet. …LHP Zack Britton (Tommy John surgery) threw another bullpen and is scheduled to face hitters sometime in the next 10 days or so, but Boone doesn’t want to place any expectations on whether the reliever can return by September.

“The plan right now if everything progresses well is to pitch for us next time,” manager Buck Showalter said. The two-time Cy Young Award winner hasn’t appeared in a major league game since July 7, 2021. …RHP Trevor May (right triceps inflammation) worked one inning for Syracuse in the same game. …C James McCann (left oblique strain) is headed to Double-A Binghamton on a rehab assignment.

Yankees: Welcome struggling Kansas City to the Bronx on Thursday night. Jameson Taillon (10–2, 3.93 ERA) pitches for New York against Brady Singer (4–3, 3.82 ERA) in the opener of a seven-game homestand. Taillon walked a season-high three in a season-low 2 2/3 innings last Friday at Baltimore. The right-hander is 1–0 with a 0.47 ERA in three career starts versus the Royals.

Mets: Following their second day off this week, the Mets face Marlins ace Sandy Alcantara (9–4, 1.81 ERA) on Friday night for the fourth time since June 19. The All-Star righty is 1–1 with a 2.45 ERA over 22 innings in the previous three matchups. New York RHP Chris Bassitt (7–7, 3.72 ERA) pitches the series opener in Miami.