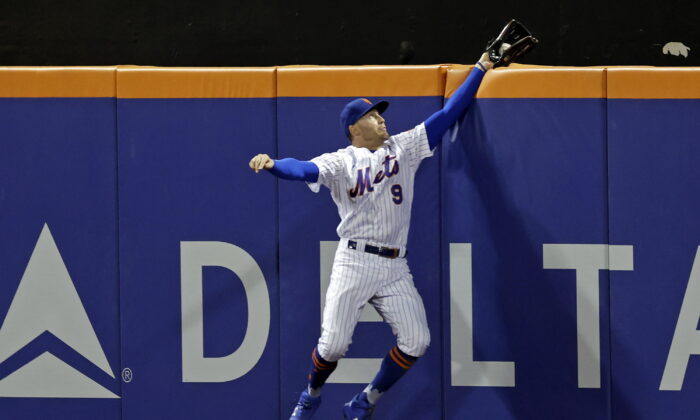 NEW YORK—Brandon Nimmo saved Jacob deGrom and the New York Mets with a breathtaking catch at the center-field fence, and Edwin Díaz entered to Timmy Trumpet’s live horns at Citi Field before closing out the Los Angeles Dodgers for a scintillating 2–1 victory Wednesday night, August 31.

Starling Marte hit a two-run homer off All-Star lefty Tyler Anderson (13–3) as the Mets evened the three-game showdown between the top two teams in the National League.

Mookie Betts connected off deGrom (4–1) for his 32nd home run, but it wasn’t enough for the Dodgers in a tight pitching duel with a playoff feel in the 2-hour, 19-minute game.

Making his sixth start of the season after returning from injury, deGrom hit 102 mph on the radar gun and struck out nine in seven innings.

He allowed three hits and walked one.

The two-time Cy Young Award winner was nursing a 2–1 lead when ex-Met Justin Turner sent a drive to deep center in the seventh.

Knowing it might tie the game, deGrom turned around and went into a worried crouch on the mound.

Nimmo, however, raced back and plucked the ball off the top of the wall with a sensational leaping grab.

The Mets tie the series following the Dodgers win 4–3 on Tuesday.