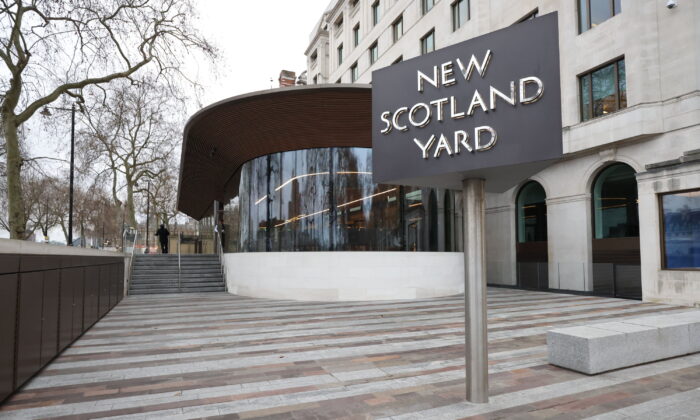 An undated image of New Scotland Yard, the home of the Metropolitan Police, in central London. (James Manning/PA)
UK

The Metropolitan Police’s response to the public in general is “inadequate,” according to a report published on Thursday by His Majesty’s Inspectorate of Constabulary and Fire & Rescue Services (HMICFRS).

The so-called PEEL report found the Met was answering 63.9 percent of 999 calls within 10 seconds—well below the national target of 90 percent—and found callers gave up trying to get through to the non-emergency 101 number in 36.6 percent of cases, compared to a target of less than 10 percent.

The damning report comes less than three months after the HMICFRS effectively put the Met into “special measures” over a series of failures, including gaps in training, response to 999 calls, and a backlog of online child abuse investigations. Retired Met officer Chris Hobbs told The Epoch Times at the time that was a “colossal slap in the face” for rank-and-file officers.

The Chief Inspector of Constabulary, Matt Parr, said the PEEL report “raises serious concerns about how the force responds to the public and the level of understanding the force has about its demand and its workforce.”

‘The Met Must Get Better’

He said: “The Met must get better at how it responds to the public—currently, its call handling teams are unable to answer calls quickly enough. In addition, it isn’t correctly documenting the decisions of victims to withdraw from an investigation or to accept an out-of-court disposal.

“Recording victims’ wishes is vital to support the criminal justice process and to understand what is stopping victims from being able to complete the investigation process. The Met must improve in this area,” added Parr.

Parr, a former Royal Navy officer and submarine commander, said: “Investigations are not always reviewed or overseen properly. There’s an unfair allocation of work, which puts undue pressure on some staff. The force needs to properly understand demand to ensure it is allocating its staff and resources effectively.”

He did praise the police’s massive security operation following the Queen’s death and he said the Met is “good at preventing crime and anti-social behaviour.”

The latest criticism from the HMICFRS comes only days after the new Commissioner, Sir Mark Rowley, started work. When he was appointed the then-Home Secretary Priti Patel ordered him to erase the “appalling mistakes of the past.”

Rowley took over after Dame Cressida Dick quit in February after losing the confidence of the Mayor of London, Sadiq Khan.

A public attitude survey from the London Mayor’s Office for Policing and Crime showed trust in the force had fallen from 83 percent in March 2020 to 73 percent two years later.

In response to the report, the Metropolitan Police said: “As well as identifying areas for improvement, the Inspectorate also details the Met’s successes and areas of innovative practice, noting the intense levels of scrutiny under which we operate. We will fix our problems and build on these positives as part of our wider journey to improve.”

The Deputy Commissioner, Dame Lynne Owens, said: “Our new Commissioner, Sir Mark, has returned to policing with a clear plan for change at the Met. We are both determined to renew policing by consent, working with communities to deliver the kind of police service Londoners need and deserve.”