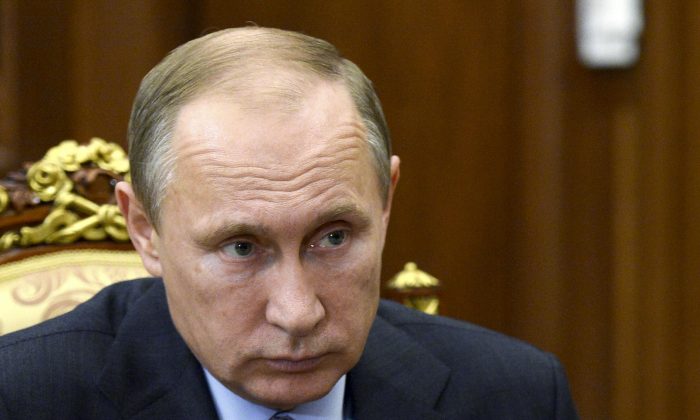 Russian President Vladimir Putin attends a meeting in the Kremlin in Moscow, Russia, Friday, Nov. 6, 2015. Russian President Vladimir Putin agreed to suspend all Russian flights to Egypt on Friday after a recommendation by his chief of intelligence for a halt until the cause of last week's crash of a passenger jet in the Sinai Peninsula is determined, as an official said pieces of wreckage from the plane had been brought to Moscow to test for possible traces of explosives. (Alexei Nikolsky/RIA-Novosti via AP)
Europe

MOSCOW—No matter what caused the fatal crash of a Russian airliner in Egypt, the answer will almost certainly hit Russia hard—but not President Vladimir Putin.

There’s no indication of a force-majeure cause such as freak weather, leaving terrorism or aircraft failure as the leading suspects. Either answer could challenge Russia’s new self-confidence—but could also be used by Putin to advance his aims and reinforce his power.

Since a Metrojet Airbus A321-200 crashed in Egypt’s Sinai peninsula on Oct. 31, killing all 224 people aboard, Russian officials have assiduously refrained from speculating on the cause of the crash and upbraided the news media for doing so. Most of those killed were Russian tourists.

But Russia’s sudden decision Friday to suspend passenger flights to all destinations in Egypt—a move it said reflects concerns about Egyptian airport security—strongly suggests that officials’ prime suspicion is that a bomb was spirited aboard the Metrojet before it left the Red Sea resort of Sharm el-Sheikh. A faction of the militant Islamic State (ISIS) claimed it had downed the airliner in retaliation for Russia launching airstrikes on ISIS positions in Syria a month earlier.

The possibility of a technical failure of the plane, which had suffered tail damage in a 2001 accident, is receding from speculation although not overtly rejected.

The crash has provoked a national wave of grief and anxiety, and if terrorism is proven, many Russians could reconsider the wisdom of the country’s airstrikes in Syria against opponents of Syrian President Bashar Assad’s government, which include ISIS.

Putin’s support hit an all-time high of nearly 90 percent after the Syria airstrikes began in September, according to the state-run pollster VTsIOM. That could erode if a bombing is confirmed.

“People should have known that we were taking a colossal risk. Today something is obvious that somehow wasn’t obvious a month ago,” analyst Gleb Pavlovsky, a former Kremlin political adviser, was quoted as saying in the online newspaper Gazeta.

But although such concerns could be strong, they are unlikely to gain enough momentum to threaten Putin’s policies or his hold on power.

“Doubts could arise: ‘Do we really need to be there? What are we actually doing there?’ … They are not catastrophic for the government but they are not pleasant,” Alexei Makarkin of the Moscow-based Center for Political Technologies told The Associated Press.

A proven terror attack on a plane full of Russian tourists could be a traumatic reminder to Russians of the vulnerability they felt to terrorism connected to the wars in Chechnya, including the twin plane suicide bombings on one night in 2004. As Moscow’s conflict with insurgents in Chechnya and other North Caucasus areas has dwindled, Russians have breathed easier—the last major terrorist attack in Russia were the December 2013 bombings in Volgograd that killed 32 people ahead of Russia hosting the 2014 Winter Olympics in nearby Sochi.

A plane attack could revive that unease but it would also be fundamentally different. It could even galvanize support for more airstrikes in Syria.

“The source of the attack is a foreign one, and it’s hard to blame Putin for the mere fact of ISIS activities,” analyst Tatiana Stanovaya wrote in the online publication Slon. “A terrorist attack against Russian citizens means a declaration of war on all Russians. The Syria campaign will thus become not a matter of Putin’s ambitions, but of national revenge.”

Makarkin suggested that many Russians had already been disappointed about Russia’s “lack of a blitzkrieg” in Syria.

A technical cause of the Metrojet crash would be an unsettling reminder for Russians about the messy years after the 1991 collapse of the Soviet Union, when Russian airlines became notorious for aging, badly maintained aircraft and improperly trained pilots. In the past decade, Russia’s major airlines have sharply modernized their fleets and raised service to international standards.

If the Metrojet plane or its crew were found to be at fault, that would tarnish Russians’ pride and confidence in their revitalized airlines and revive persistent suspicions about business ethics and aviation regulators’ competence or corruption.

But Makarkin said Putin himself would likely avoid being hit by any blowback.

“Corruption is not linked to Putin and the government in the popular perception. People’s wrath will be targeted on corrupt officials and greedy businessmen,” he said.

For now, Russian officials’ restraint in not favoring one crash cause explanation over another may be a useful strategy, Stanovaya said.

“The less evidence to back up this or that theory that is out there, the more room the Russian government will have to pick and choose the one that suits it the most,” she wrote. “They may (eventually) favor terrorism by using it as an additional argument in favor of beefing up its military operation against ISIS.”