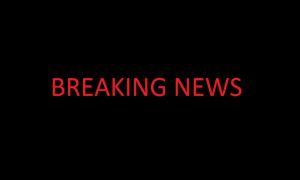 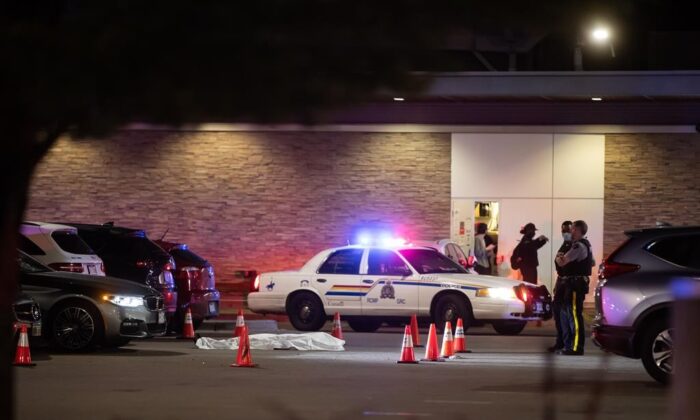 RCMP officers stand near a body covered with a tarp in the parking lot of a shopping complex after one person was killed and two others were injured during a shooting in Burnaby, B.C., on May 13, 2021. (Darryl Dyck / The Canadian Press)
Canada

The Burnaby RCMP are investigating a shooting at a shopping complex in Metro Vancouver that left one person dead and two others in hospital.

Police said they were called to the scene around 8:35 p.m. Thursday following reports of gunshots at Market Crossing.

The initial investigation shows this shooting “does not appear to be a random act,” they said in a news release.

They found one man with gunshot wounds and despite all attempts to revive him, they said he succumbed to his injuries. The other two who were wounded are recovering in hospital, they said.

The area surrounding the shooting will be cordoned off for a significant amount of time as the Burnaby Mounties work in conjunction with the Integrated Homicide Investigation Team, they said.

No suspect information was immeditely released.

The shooting happened just hours after Mike Farnworth, B.C.’s solicitor general, met with representatives from police agencies to get a full sense of the “intolerable” situation facing Lower Mainland communities as a gang conflict rages on.

Thursday’s meeting followed a recent spate of shootings that have left gang members dead or injured on streets, in mall parking lots and at Vancouver’s airport.

At a news conference earlier in the day, Farnworth said the meeting would be a chance to hear about how the different law enforcement agencies are working together.

“It’s also an opportunity to identify any potential gaps,” he said.

“Police said it’s not about resources so I also want to make sure there’s not any other areas we need to be focusing on.”

The public needs to know that “every tool and every resource” is brought to bear on this recent upsurge in gang violence, he said.

“The police are doing everything we can,” Farnworth added. “The message to the public is that we are all focused on this.”

The latest shooting Thursday night comes after a 28-year-old gang member was killed outside the departure terminal at Vancouver’s airport on Sunday.

Karman Grewal, 28, was gunned down outside the departure terminal. Police roadblocks, air support and even a running gun confrontation with an RCMP officer couldn’t stop the suspects from escaping.

The police pursuit of a suspected getaway car ended when an occupant of the vehicle fired at law enforcement, striking the cruiser’s windshield without harming an officer, investigators said.

Grewal was one of five men named by RCMP as targets of shots−fired incidents in a 2017 news release. Although they were victims or intended victims, the Mounties believed the men to be a risk to public safety because they refused to speak with investigators.

Police cautioned anyone against interacting with Grewal and the others because of their status as targets.

Meanwhile, police announced on Monday that Ahmed Tahir has been charged with first-degree murder for a shooting in Burnaby last Saturday that left Toni Dalipi, 19, dead and injured a bystander.

Premier John Horgan said this week that the government wants to make sure it’s “focused like a laser” on addressing criminality.

“The first order of business of course is to stop the flow of young people into the gang lifestyle,” he said Tuesday.

“But clearly the brazen nature of the violence we’ve seen over the past two weeks requires law enforcement intervention.”

Martin Bouchard, a professor in Simon Fraser University’s school of criminology, said gang violence follows its own course regardless of what the initial motive was for the conflict.

These gang conflicts tend to go in cycles and once they start, Bouchard said they take on a life of their own.

“Sometimes these start based on perception of disrespect between two people,” he said.

“It could be, you know, a romantic relationship gone wrong. Regardless of the initial motive, we are in a cycle of retaliation. It will follow its course to its—hopefully—conclusion very soon.”