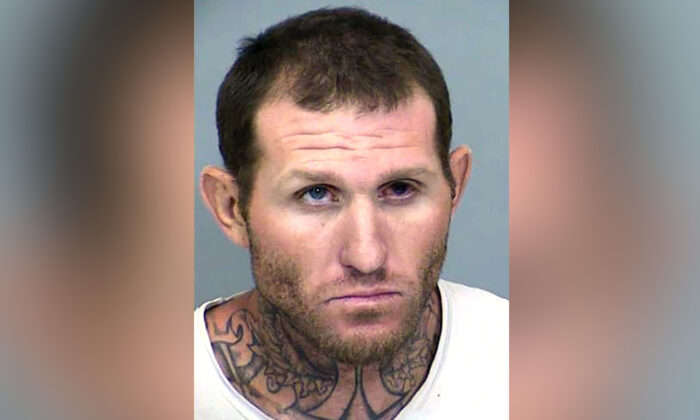 PHOENIX—A suspect who allegedly assaulted and gravely injured a metro Phoenix sheriff’s deputy has been shot and wounded by a homeowner with whom he had a history of conflicts, authorities said Sunday.

Maricopa County Sheriff’s officials said the suspect—identified as 30-year-old Clinton Robert Hurley— was hospitalized in critical condition while the deputy was on life support.

Hurley was shot Saturday night at a home in Tonopah, some 52 miles west of Phoenix.

The manhunt for Hurley began around 11 a.m. Saturday after he allegedly attacked a deputy who was processing the suspect on multiple felony warrants at a substation in suburban Avondale, about 18 miles west of Phoenix, according to authorities.

Sheriff’s officials said the deputy, a three-year veteran of the department whose name wasn’t immediately released, was found unconscious and bleeding from the face and rushed to a hospital.

Hurley took the deputy’s SUV, crashed through a fence and fled the area before allegedly stealing another vehicle and driving to Tonopah, according to authorities.

Sheriff Paul Penzone said at a news conference Saturday night that Hurley and the unidentified homeowner had a history of conflict, but he didn’t release any details.

Hurley was released from an Arizona prison in December after serving time for attempted child molestation, Penzone added.

It wasn’t immediately known if Hurley had a lawyer who could speak on his behalf.