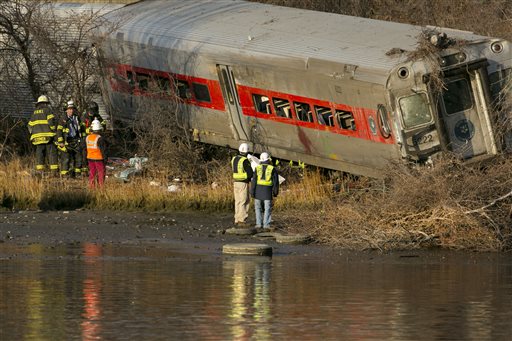 Officials with the National Transportation Safety Board inspect a derailed Metro North commuter train where it almost fell into the Harlem River, Sunday, Dec. 1, 2013 in the Bronx borough of New York. The Metro-North train derailed on a curved section of track early Sunday, coming to rest just inches from the water, killing at least four people and injuring more than 60, authorities said. (AP Photo/Mark Lennihan)
New York

NEW YORK—The Metro North train that derailed on Sunday killing four, was traveling 82 mph in a 30 mph zone, according to preliminary data from the NTSB.

The speed limit just prior to the sharp curve at Spuyten Duyvil is 70 mph.

Just a day after the crash, Earl Weener, a board member for the NTSB, said their investigation as just beginning and they did not know if it was human error that led to the high speed, or mechanical failure.

“It is premature to blame anyone or anything right now,” Weener said at a press briefing on Monday evening.

The train made nine stops prior to the curve, where the brakes functioned normally.