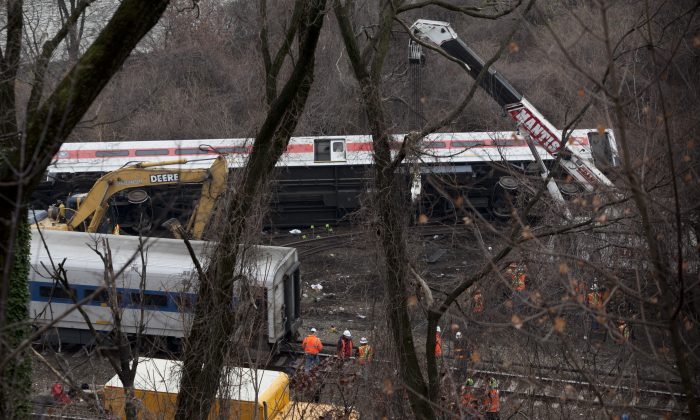 NEW YORK—The train that derailed in the Bronx Sunday, killing four people and injuring more than 60, entered one of the sharpest curves in the Metro-North system at 82 miles an hour instead of the required 30 miles an hour, according to data gathered from recording devices aboard the locomotive.

The train was traveling too fast even for the stretch of track prior to the curve where the speed limit is 70 miles an hour, Earl Weener, a member of the National Transportation Safety Board (NTSB), said Monday afternoon.

“When I heard about the speed I gulped. It sort of takes your breath away,” said Sen. Charles Schumer (D-N.Y.) at the NTSB press briefing. “The fact that it was going at 82 miles an hour even in the 70 miles an hour zone even before the curve started raises so many questions and is scary.”

Whether the accident just north of the Spuyten Duyvil station was caused by the train’s engineer or mechanical malfunctions is still unclear, Weener said. Officials ruled out track condition as a possible cause. “It looks pretty certain that the tracks are okay,” Schumer said.

To determine the cause of the deadly derailment, the first with a fatal outcome in Metro-North’s 30-year history, investigators are interviewing members of the crew and the train engineer, and reviewing additional data from the recording devices. The engineer’s cellphone was recovered and NTSB will review the data once it is available. Drug and alcohol tests on the engineer were performed, but results are not yet available.

The breaks on the train functioned properly during the nine stops the train made before derailing at 7:20 a.m. and slamming into a patch of dirt at the edge of the Harlem River.

Six seconds before the locomotive ground to a stop, the throttle was reduced to idle; a second later, the breaks were applied fully, data from the recording devices indicated. Whether it was the engineer who triggered the breaks, or if they were engaged as the result of the derailment is still unclear. Both events occurred close to the point at which the train derailed, Weener acknowledged.

“At this point in the investigation we don’t know what the initiating event was for either the throttle going to idle or the brake pressure dropping to zero,” Weener said.

On Tuesday, heavy-duty cranes lifted the train cars from the dirt and placed them back onto the tracks. Video provided by the NTSB shows cars with sheared sides, shattered windows, and compartments packed with several feet of dirt.

The NTSB handed the tracks over to Metro-North for repairs Monday. The tracks near the site of the derailment were mangled, showing the immense force of the locomotive that slowed from 82 to zero miles an hour in less than six seconds.

The engineer was identified as William Rockefeller, according to two officials familiar with investigation who spoke on condition of anonymity because they weren’t authorized to speak publicly.

An engineer for about 11 years and a Metro-North employee for about 20, Rockefeller “is totally traumatized by everything that has happened,” said Anthony Bottalico, executive director of the Association of Commuter Rail Employees, the union representing all the crew members. He said Rockefeller was “cooperating fully to get to the root cause” of the wreck.

“He’s a sincere human being with an impeccable record that I know of. He’s diligent and competent,” Bottalico said.

The train’s assistant conductor, Maria Herbert, suffered an eye injury and a broken collarbone in the crash, Bottalico said.

While many survivors had been discharged from hospitals by Monday afternoon, seven were still in an intensive care unit at St. Barnabas Hospital, some with spinal injuries, according to Dr. David Listman, the emergency department director.

Overall, the injured ranged from five police officers who were heading to work, according to Mayor Michael Bloomberg, to a 14-year-old boy who was taking a weekend ride with his father on the same train the boy usually takes to school.

The boy had been released. But in the wake of the accident, the boy’s mother wondered, “How is he going to get back on a Metro-North train to go back to school?” said Listman, recalling his conversation with her.

Sunday’s crash in the Bronx is the second passenger train derailment in six months for the rail service and presents Metro-North with another problem, even though the railroad’s train accident record had been improving.

The number of Metro-North train accidents has been falling for the past decade, according to a Federal Railroad Administration database. But injuries from those accidents are up dramatically this year, and accidents this year are on the rise.

Though the cause is not yet known, the NTSB has been urging railroads for decades to install technology that can stop derailing caused by excessive speed, along with other problems.

A rail-safety law passed by Congress in 2008 gave commuter and freight railroads until the end of 2015 to install the systems, known as positive train control. PTC is aimed at preventing human error—the cause of about 40 percent of train accidents. But the systems are expensive and complicated and can’t prevent an accident if there’s a brake failure. Railroads are trying to push back the installation deadline another five to seven years.

Metro-North is in the process of installing the technology. It now has what’s called an “automatic train control” signal system, which automatically applies the brakes if an engineer fails to respond to an alert that indicates excessive speed.

Such systems can slow trains in some circumstances but not bring them to a halt, said Grady Cothen, a former Federal Railroad Administration safety official.

While the repairs and the investigation continue, the Metropolitan Transportation Authority (MTA) arranged shuttle buses and additional subway trains for the 26,000 weekday riders on the Hudson Line.

Marketing worker Leanne Bloom, 40, normally takes the affected Hudson Line to work, but drove to a stop on another line instead. She was surprised to find the train nearly empty.

“I was expecting long lines” at the station, she said. “But I made it very easily.”

Raymond Finch was trying to see friends in Ossining, N.Y. He spent 10 minutes on the phone reworking his trip along the Harlem Line and arranged for friends to pick him up.

His thoughts were on the victims, rather than his slight inconvenience.