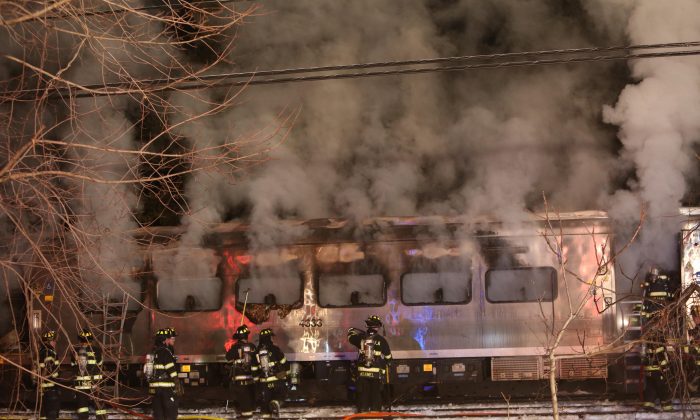 A Metro-North train hit a car on Tuesday evening in Valhalla, New York, according to reports.

There were a number of injuries, the reports said. NBC reported that many as 12 were hurt, and officials described the crash as a “mass casualty” incident.

Harlem Line Service is temporarily suspended btwn N White Plains & Pleasantville due to a train striking a motor vehicle near Valhalla.

The train was running on the Harlem line, which is now experiencing delays.

It’s unclear how the car got onto the train tracks. One person on Twitter said she was on the train, and said there was a fire but everyone was able to get out.

Donovan says the vehicles and the front of the train caught fire. He says there have been injuries but no fatalities have been reported.

The rail passengers were moved to the rear of the train, which had left Grand Central Terminal about 45 minutes earlier.

Service on Metro-North’s Harlem Line has been suspended between Pleasantville and North White Plains.

Metro-North is the nation’s second-busiest railroad, after the Long Island Rail Road. It was formed in 1983 and serves about 280,000 riders a day in New York and Connecticut.

WNBC: At least a dozen people injured after Metro-North train slammed into car, burst into flames in Valhalla, NY pic.twitter.com/ArjPZpbdjh