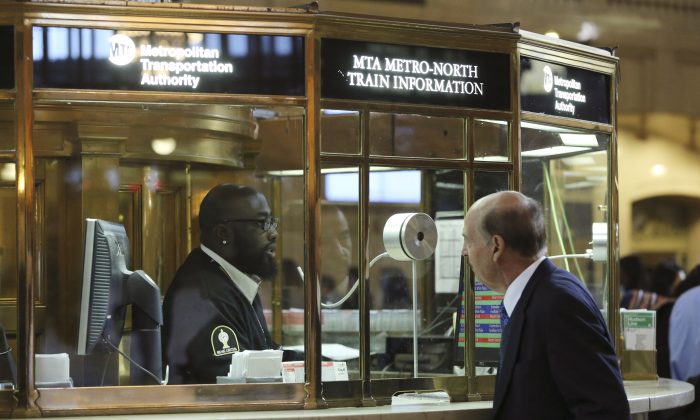 NEW YORK—Commuters affected by the power outage along the Metro-North New Haven line will receive a credit from the Metropolitan Transit Authority.

The Metropolitan Transit Authority(MTA) board unanimously approved the credit program on Oct. 1.

“It was the magnitude of this and its duration that put it in its special status,” MTA Chairman and CEO Thomas Prendergast said at a press conference.

The Metro-North commuters on the New Haven Line have been left without service since early morning Sept. 25, after a feeder cable failure at Con Edison cut off electricity from trains.

People who held monthly, weekly, or by-weekly tickets during the week of the power outage can use the credit toward the purchase of a future ticket.

The MTA will reimburse commuters depending on the amount of time the train service does not function at full capacity. According to Prendergast, normal service is expected to resume on Oct. 8.

“The primary focus right now is the full service restoration, and what we can do in the interim,” Prendergast said.

Credits to commuters for one week of service disruptions will cost the MTA $2 million and will continue to grow until service is fully restored.

The MTA is still considering how credits will be issued to commuters and will announce its decision on the mta.info website. Commuters are asked to hold on to their tickets to claim credit.

Some 130,000 Metro-North customers had to rely on limited electric trains that were powered by temporary feeders in Harrison, N.Y.

As of Oct. 1, Metro-North restored up to 50 percent of service capacity using the temporary feeders. Beginning on Oct. 2, morning service on the line will be increased to 65 percent capacity with five additional peak-time trains.

Con Edison and other parties will be conducting investigations to determine the cause of the feeder cable failure. According to Prendergast, if Con Edison is at fault and there is basis for a claim to be made, the MTA will consider it.