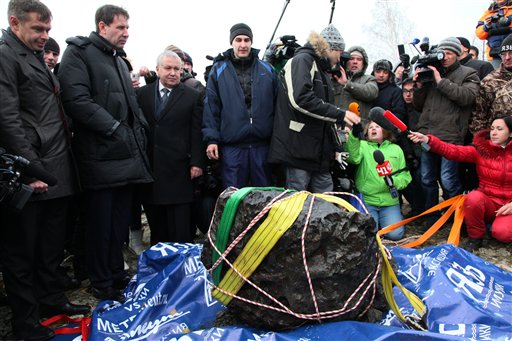 People look at what scientists believe to be a chunk of the Chelyabinsk meteor, recovered from Chebarkul Lake near Chelyabinsk, about 1500 kilometers (930 miles) east of Moscow, Russia, Wednesday, Oct. 16, 2013. Scientists on Wednesday recovered what could be the largest part of this meteor from Chebarkul Lake outside the city. They weighed it using a giant steelyard balance, which displayed 570 kilograms (1,256 pounds) before it broke. (AP Photo/Alexander Firsov)
Europe

Meteor Chunk Raised from a Lake in Russia (+Photo)

MOSCOW—Russian scientists have recovered a giant chunk of the Chelyabinsk meteorite from the bottom of the lake it crashed into.

The meteor that blazed across southern Urals in February was the largest recorded strike in more than a century. More than 1,600 people were injured by the shock wave from the explosion as it hit near the city of Chelyabinsk, estimated to be as strong as 20 Hiroshima atomic bombs.

Scientists on Wednesday recovered what could be the largest part of the meteorite from Chebarkul Lake outside the city. They weighed it using a giant steelyard balance, which displayed 570 kilograms (1,256 pounds) before breaking.

Sergei Zamozdra, an associate professor at Chelyabinsk State University, told Russian television the excavated fragment was definitely a chunk of the meteorite.

“The preliminary examination… shows that this is really a fraction of the Chelyabinsk meteorite,” she said. “This chunk is most probably one of the top 10 biggest meteorite fragments ever found.”

Dr. Caroline Smith, curator of meteorites at London’s Natural History Museum, told BBC that the object was a meteorite. She confirmed that from features known as fusion crust and regmaglypts, which are seen in images of the chunk.

“Fusion crust forms as the meteoroid is travelling through the atmosphere as a fireball,” she said. “The outer surface gets so hot it melts the rock to form a dark, glassy surface crust which we term a fusion crust. Regmaglypts are the indentations, that look a bit like thumbprints, also seen on the surface of the meteorite.”