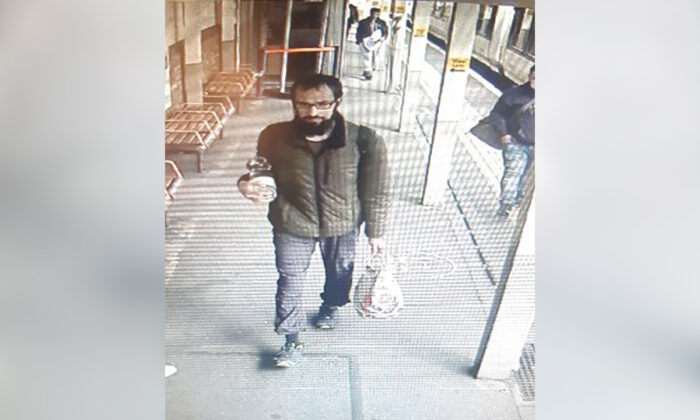 Undated CCTV image of a man suspected of multiple assaults against Jewish males in London on Aug. 18, 2021. (Metropolitan Police)
UK

The Metropolitan Police on Wednesday released new images of a man suspected of multiple assaults on Jewish males in north London.

The Met have been looking for the man since Aug. 20 following reports of five unprovoked attacks on Aug. 18.

CCTV footage released by Jewish neighbourhood watch group Shomrim shows the man—dressed in white Islamic garb and a khaki jacket—attacking several Jewish males unprovoked, including a 64-year-old man who was struck in the face and fell to the ground on Stamford Hill. He suffered facial injuries and a broken bone in his foot, according to the Met.

The same man is shown to have smacked a 30-year-old Jewish man with a bottle on Cazenove Road. The Jewish man sustained no injuries.

He was also filmed punching a 14-year-old Jewish boy who was walking on Holmdale Terrace. The Met said the boy didn’t sustain any lasting injuries.

Police said they received reports of a fourth and a fifth attack, but haven’t identified the victims yet.

Detective Chief Inspector Yasmin Lalani said on Friday that the police retain an open mind regarding the motive behind the assaults, but the incidents were being treated as hate crimes.

In the latest development, police have established that the man stayed at a hostel on Seven Sisters Road in Hackney between Aug. 17 and Aug. 19.

The Met was previously told by local Jewish and Muslim communities that the suspect had not been seen locally before, and shop staff in Seven Sisters Road who interacted with the man suggested he may have a northern, possibly Yorkshire, accent.

Lalani said on Wednesday that the police “remain determined to identify the man responsible for these unprovoked attacks.”

Lalani appealed to people who stayed at the same hostel and at the same time with the suspect to come forward if they have information.

“It is vital that we bring these incidents to a conclusion,” Lalani said.

After the 64-year-old man was injured on his way to his synagogue, London Mayor Sadiq Khan said he “utterly condemn[s] this appalling attack.”

“Let me be clear, racist abuse and hate crime, including anti-Semitism, have absolutely no place in our city,” the Muslim mayor wrote on Twitter on Aug. 23.

The victim told the PA news agency on Aug. 22 that he could not remember the incident as he had been knocked unconscious.

“I hit my head on the wall and that was it, I have no recollection,” he said.

“The police are taking this extremely seriously because there is an awful lot of anxiety in the community, but we are a very tight-knit, welcoming, and loving community.”