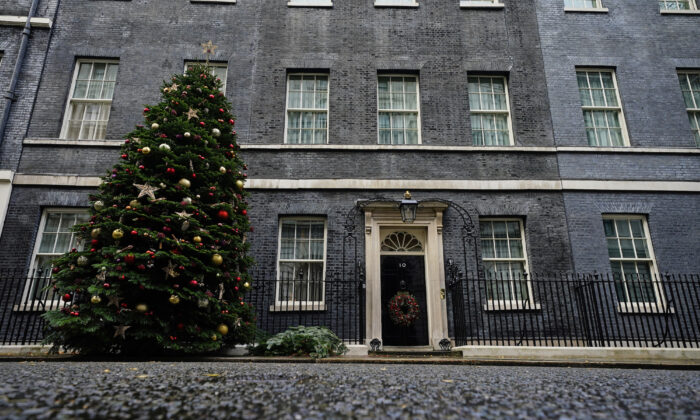 The Metropolitan Police said on Wednesday it will not commence an investigation into the alleged breaching of CCP (Chinese Communist Party) virus restrictions in 10 Downing Street during Christmas a year ago due to the lack of evidence.

The force said the decision was made in line with its policy not to investigate retrospective breaches of such regulations, but said it’s willing to reconsider if more evidence emerges.

The Daily Mirror reported last week that Downing Street staff held a party on Dec. 18, 2020—two days after London was put under the highest tier of England’s restrictions—among other alleged gatherings.

On Wednesday, Prime Minister Boris Johnson ordered Cabinet Secretary Simon Case to conduct an internal investigation into the allegations, after a week of denying any rule-breaking.

Johnson told MPs he based that position on assurances from junior staff as he offered an apology.

On the same day, his senior aide Allegra Stratton resigned after a video emerged showing her joking about the alleged gathering during a mock press conference.

The Met said it received “a significant amount of correspondence” relating to the alleged gatherings at No. 10 Downing Street in November and December 2020.

“All this correspondence has been considered by detectives in detail, as well as footage published by ITV News,” the Met said in a statement.

“The correspondence and footage does [sic] not provide evidence of a breach of the Health Protection Regulations, but restates allegations made in the media,” the statement reads.

“Based on the absence of evidence and in line with our policy not to investigate retrospective breaches of such Regulations, the Met will not commence an investigation at this time.”

The Met said it had had discussions with the Cabinet Office, which will pass on new evidence, should it be found as a result of its investigation, to the Met “for further consideration.”

But shadow health secretary Wes Streeting said police must “pursue this investigation without fear or favour and treat the prime minister and his staff as they would treat anyone else.”

“It seems implausible for the Metropolitan Police to argue there is no evidence that parties took place,” he told reporters.

“The police ought to be knocking on doors, taking statements, and investigating people in No. 10 in the way they would my constituents or anyone else in the country.”

Scottish Conservative leader Douglas Ross said Johnson should quit if he was found to have misled Parliament.

Downing Street’s official line has now shifted with the announcement of the Case inquiry, with the prime minister’s press secretary declining to repeat the statement that “there was no party.”

She said “it wouldn’t be right to comment further” while Case was investigating.