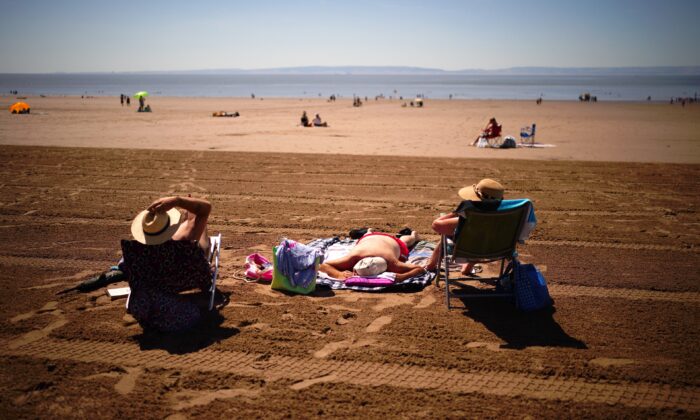 Monday may become the hottest day of the year so far in parts of the UK, with even higher temperatures expected at the weekend.

Heat-health alerts are in place from Monday to July 15, with an extreme heat warning issued for much of England and parts of Wales on July 17.

The Met Office said highs of 33 degrees C are expected in some areas on Monday afternoon, with central, southern, and eastern England all experiencing rising temperatures during the heatwave.

It could mark the hottest day of the year so far, with the UK’s record high for this year currently standing at 32.7 degrees C. It was recorded at Heathrow on June 17.

The Met Office and the UK Health Security Agency (UKHSA) have issued a level two heat-health alert for the southwest, East Midlands, West Midlands, northwest, and Yorkshire, and the Humber regions between 9 a.m. on Monday and 9 a.m. on July 15.

The east of England, southeast, and London regions, which had a level two alert in place since July 6, have had their alert level raised to three on Monday.

Dr. Agostinho Sousa, head of extreme events and health protection at UKHSA, urged Britons to keep themselves hydrated and to find shade between 11 a.m. and 3 p.m.

The warm weather is expected to continue through the week in the high 20s for most until the weekend, when the mercury may rise again to 31 degrees C in places such as London, Reading, and Oxford.

Issuing an amber extreme heat warning for July 17, the Met Office said on Monday that temperatures could be in excess of 35 degrees C in the southeast, and more widely around 32 degrees C within the warning area.

It also said these high temperatures could extend into the early part of next week and an extension of the warning will be considered in the coming days.

This means parts of the country will be hotter than some of the world’s top beach destinations, including the Maldives and Marbella in Spain.

Weather forecasting models suggest it is possible—though not likely—temperatures could reach 40 degrees C in the UK next weekend, which would break the current British temperature record of 38.7 degrees C set in Cambridge in July 2019.

However, a spokeswoman for the Met Office said it takes computer modelling into consideration when making its predictions and it believes the warmest weather will not reach 40 degrees C.

The Local Government Association, which represents councils in England and Wales, has encouraged people to enjoy the sun safely and to check up on those who may be more vulnerable, including the elderly and those with heart and respiratory problems.

Water companies, meanwhile, are urging people not to waste water during the heatwave this week because companies are not able to treat water quickly enough to keep up with the demand.