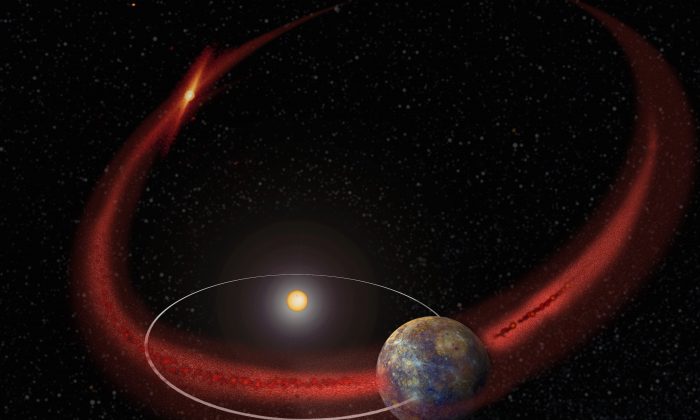 The closest planet to the sun appears to get hit by a periodic meteor shower, possibly associated with a comet that produces multiple events annually on Earth.

The clues pointing to Mercury’s shower were discovered in the very thin halo of gases that make up the planet’s exosphere, which is under study by NASA’s MESSENGER (MErcury Surface, Space ENvironment, GEochemistry, and Ranging) spacecraft.

“The possible discovery of a meteor shower at Mercury is really exciting and especially important because the plasma and dust environment around Mercury is relatively unexplored,” said Rosemary Killen, a planetary scientist at NASA’s Goddard Space Flight Center in Greenbelt, Maryland, and lead author of the study, available online in Icarus.

A meteor shower occurs when a planet passes through a swath of debris shed by a comet, or sometimes an asteroid. The smallest bits of dust, rock and ice feel the force of solar radiation, which pushes them away from the sun, creating the comet’s sometimes-dazzling tail. The larger chunks get deposited like a trail of breadcrumbs along the comet’s orbit – a field of tiny meteoroids in the making.

Earth experiences multiple meteor showers each year, including northern summer’s Perseids, the calling card of comet Swift–Tuttle, and December’s reliable Geminids, one of the few events associated with an asteroid. Comet Encke has left several debris fields in the inner solar system, giving rise to the Southern and Northern Taurids, meteor showers that peak in October and November, and the Beta Taurids in June and July.

The suggested hallmark of a meteor shower on Mercury is a regular surge of calcium in the exosphere. Measurements taken by MESSENGER’s Mercury Atmospheric and Surface Composition Spectrometer have revealed seasonal surges of calcium that occurred regularly over the first nine Mercury years since MESSENGER began orbiting the planet in March 2011.

The suspected cause of these spiking calcium levels is a shower of small dust particles hitting the planet and knocking calcium-bearing molecules free from the surface. This process, called impact vaporization, continually renews the gases in Mercury’s exosphere as interplanetary dust and meteoroids rain down on the planet. However, the general background of interplanetary dust in the inner solar system cannot, by itself, account for the periodic spikes in calcium. This suggests a periodic source of additional dust, for example, a cometary debris field. Examination of the handful of comets in orbits that would permit their debris to cross Mercury’s orbit indicated that the likely source of the planet’s event is Encke.

“If our scenario is correct, Mercury is a giant dust collector,” said Joseph Hahn, a planetary dynamist in the Austin, Texas, office of the Space Science Institute and coauthor of the study. “The planet is under steady siege from interplanetary dust and then regularly passes through this other dust storm, which we think is from comet Encke.”

The researchers created detailed computer simulations to test the comet Encke hypothesis. However, the calcium spikes found in the MESSENGER data were offset a bit from the expected results. This shift is probably due to changes in the comet’s orbit over time, due to the gravitational pull of Jupiter and other planets.

“The variation of Mercury’s calcium exosphere with the planet’s position in its orbit has been known for several years from MESSENGER observations, but the proposal that the source of this variation is a meteor shower associated with a specific comet is novel,” added MESSENGER Principal Investigator Sean Solomon, of the Lamont-Doherty Earth Observatory at Columbia University in New York. “This study should provide a basis for searches for further evidence of the influence of meteor showers on the interaction of Mercury with its solar-system environment.”

The Johns Hopkins University Applied Physics Laboratory built and operates the MESSENGER spacecraft and manages this Discovery-class mission for NASA.