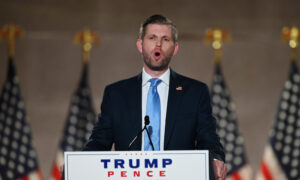 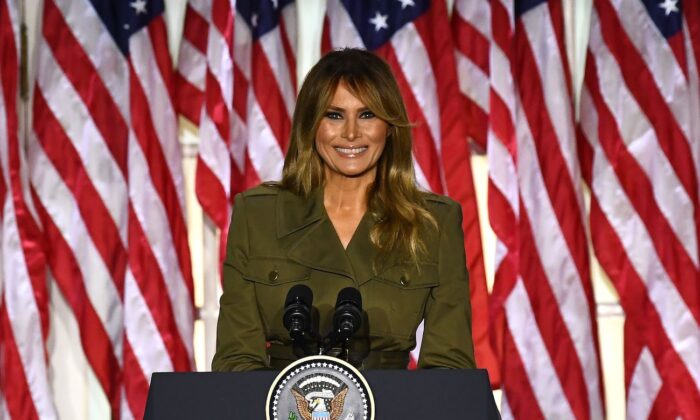 First Lady Melania Trump addresses the Republican Convention during its second day from the Rose Garden of the White House in Washington on Aug. 25, 2020. (Brendan Smialowski/AFP via Getty Images)
2020 Election

Message of Unity on 2nd Night of 2020 GOP Convention

First Lady Melania Trump called for Americans to “cherish one another” amid racial unrest in the country in a message of unity on the second night of the 2020 Republican National Convention.

“Like all of you, I have reflected on the racial unrest in our country,” the first lady, the keynote speaker of the night, said in a televised live address late Aug. 25. “It is a harsh reality that we are not proud of parts of our history. I encourage people to focus on our future while still learning from our past.

“We must remember that today we are all one community, comprised of many races, religions, and ethnicities. Our diverse and storied history is what makes our country strong, and yet we still have so much to learn from one another,” she told the nation, while standing before a crowd of about 100 in the White House Rose Garden.

She called Americans to “take a moment, pause, and look at things from all perspectives,” and to “come together in a civil manner so we can work and live up to our standard American ideals.”

“I also ask people to stop the violence and looting being done in the name of justice, and never make assumptions based on the color of a person’s skin,” the first lady said. “Instead of tearing things down, let’s reflect on our mistakes. Be proud of our evolution and look to our way forward. Every day, let us remember that we are one nation under God and we need to cherish one another.”

Protests have swept the country in the months since the death in May of George Floyd, a black man, in police custody in Minnesota. Protests flared anew this week after another black man, Jacob Blake, was left at least temporarily paralyzed after he was shot by police in Kenosha, Wisconsin. On the night of Melania Trump’s address, two died in gunfire amid protests in Kenosha.

“While at times we only see the worst of people and politics on the evening news, let’s remember how we come together in the most difficult times,” the first lady told the nation. “And while debate rage on about issues of race, let’s focus on the strides we have made and work together for a better tomorrow for everyone.”

Trump acknowledged and expressed her sympathies to Americans about the CCP (Chinese Communist Party) virus pandemic wreaking havoc on the nation, as well as the nation’s drug and mental health crisis amid the pandemic.

She told the nation that her husband is “an authentic person who loves this country and its people, and wants to continue to make it better.”

“I don’t want to use this precious time attacking the other side, because as we saw last week, that kind of talk only serves to divide the country further,” she said, adding that she believes President Trump’s leadership can help bring the United States “once again to the greatest economy and the strongest country ever known.”

The 2020 convention was held largely in a virtual format due to social distancing guidelines amid the CCP virus pandemic. Many of the speakers also delivered their remarks live from the empty Andrew W. Mellon Auditorium, a federal government building in Washington.

During the second night’s program, President Trump in pre-recorded videos issued a pardon to former prisoner Jon Ponder, a man who was arrested for robbing a bank and has since founded a nonprofit to help other former prisoners reintegrate into society.

Trump also participated in a naturalization ceremony at the White House for five new U.S. citizens, who hailed from Bolivia, Lebanon, India, Sudan, and Ghana.

To the theme of “Land of Opportunity,” speakers shared about how they felt Trump’s policies have helped improve their lives or the lives of their fellow Americans. Topics ranged from deregulations that have benefited businesses and the environment, the economy, farmers and agriculture, religious freedom, rights of the unborn, foreign policy, and more.

Tiffany Trump focused her speech on alleged manipulation of public thought and opinion by tech giants and media outlets, which she says has fostered division among Americans.

“Rather than allowing Americans the right to form our own beliefs, this misinformation system keeps people mentally enslaved to the ideas they [the media] deem correct,” she said. “This has fostered unnecessary fear and divisiveness amongst us.”

She said that as a result, the nation “suffers by inhibiting our diversity of thought and inclusion of ideas,” adding, “Working together, outside of our political comfort zones, will accomplish so much more.”

“We believe in the American spirit. A country founded on ideas, not identity. A country where our differences are embraced.”

President Trump is scheduled to deliver his convention speech from the White House lawn on Aug. 27.