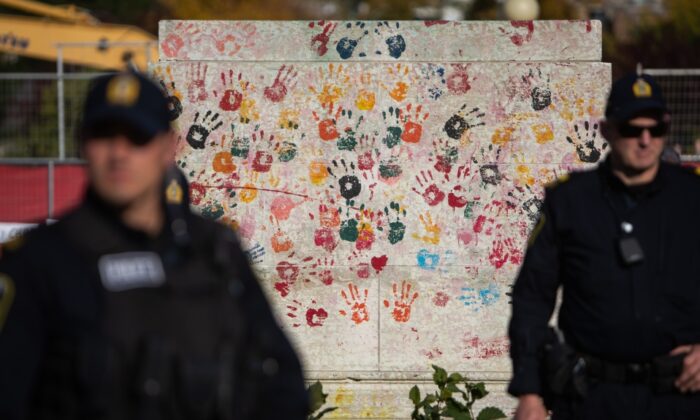 The pedestal where a large statue of queen Victoria stood until it was pulled down by protestors on July 1, 2021, is covered in handprints at the Manitoba legislature grounds in Winnipeg, Oct. 4, 2022. (The Canadian Press/Daniel Crump)
By The Canadian Press

A 101-year-old message has been discovered by workers removing the base of a former statue in front of the Manitoba legislature.

Workers have been removing, piece by piece, the large base that held a statue of Queen Victoria. The statue was toppled last year by protesters. Its head was removed and thrown in the nearby Assiniboine River. The base is being removed to make way for a replacement.

When crews recently removed one section of the base, they found a broken bottle and a note that had been placed inside. The note was an apology of sorts, dated July 30, 1921,—an era when alcohol was outlawed.

“It says, on account of the Prohibition, we are unable to adhere to the custom of depositing a bottle of brandy under the stone, for which we are extremely sorry, I believe is what it says,” Reg Helwer, minister responsible for government services, said Wednesday as he tried to make out the wording on the worn dispatch.

The note is signed by a stonecutter, other workers and a bureaucrat—the province’s deputy minister of public works at the time.

The government is now working out how to best preserve the document and what should be done with it.

Helwer said it’s not the first time an item from Manitoba’s early days as a province has been discovered unexpectedly.

“Apparently there are things of that nature around the legislature. As we move stones, we do discover things like this,” he said.

“To me, it’s a very neat story, especially with the age of the building, just recently celebrating a hundred years not long ago.”