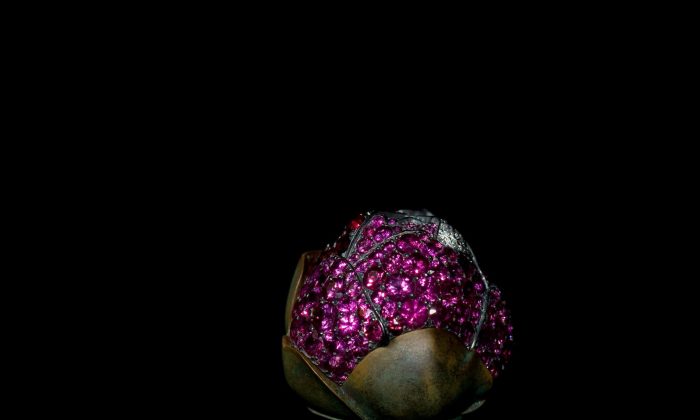 The experience of stepping into the dimly lit Gallery 913 is like being hit by lightning—in a good way.

Over 400 pieces by renowned jewelry designer Joel A. Rosenthal, who works in Paris under the name JAR, are currently on view at the Metropolitan Museum of Art.

Visitors’ reactions range from loud exclamations to open-mouthed, staring disbelief at both the virtuosity of JAR’s jewels and the literal brightness that emanates from each gem-encrusted work of art.

There is not much to prepare one for stepping into the spiral, labyrinthine gallery; it gives you only one way in, and one way out.

The first, and most unique piece, sets the tone for things to come. Covered in garnets and diamonds, the brooch depicts an unraveling orange peel with orange blossoms seemingly emerging out of the peel, on top. Exhibition curator Jane Adlin calls it a “tour de force—you’re seeing the inside of the peel, which is the mechanism that holds the stones, and yet it’s a perfectly magnificent piece of art even from the inside.”

A master of color, Rosenthal uses the pavé technique, the setting of small stones so close together they appear as a continuous surface, to heighten the drama and exquisite beauty of many of his pieces.

The Love of Fine Art

Growing up in the Bronx, Rosenthal spent much of his time visiting the city’s museums and galleries. According to Adlin, JAR is trading off his anonymity for the opportunity of having a show at the Met, which he frequented as a child.

Rosenthal is quoted as having said, “We are not afraid of any materials.” Indeed, he uses even aluminum as a base for his designs, as well as blackened silver to enhance the color and shine of the stones, and even beetle wings.

And it is worth reading the exhibition list because it can reveal what is humorously hidden in plain sight.

The humble carrot flower has never been, and probably will never be, glorified in a more brilliant way than it has been in the hands of Rosenthal. The Carrot Flower Brooch (2009) looks like a galaxy of minuscule white diamonds, which upon careful study of the written description and much closer inspection of the piece itself, reveals that is made up of not just diamonds, silver, and gold, but rubies as well. This speaks volumes of the artist’s vision. At the very center of the most blinding white light emanating from the diamonds, is the birth of color–the tiniest of three or four intense magenta rubies.

Other pieces such as the Rose Petal Earrings (1996) demonstrate Rosenthal’s perfected control of color so that the pavé gemstones are arranged to create an ombre effect, seamlessly progressing from darker rubies, to light pink sapphires, and finally to white diamonds. Adlin explains that sometimes it takes Rosenthal years to collect what he wants to incorporate into one piece.

Point in case: an opal sautoir necklace was created with a mind-boggling amount of large opal spherical beads of the same color and intensity.

As exhibition curator, Adlin has had the privilege of holding the jewels and being able to see them from all sides. She said, “Sometimes Rosenthal will put diamonds on the back of the earrings’ clip so that only you know [they’re] there, which is a wonderful touch. He’s really a genius.”

The exhibition also includes sculptural gemstone boxes where JAR develops a lightning strike theme, which can also be seen in some other wearable pieces.

One of the most surprising of JAR’s creations, which also seemed to elicit an interesting range of reactions (with no diamonds or any other gemstones in sight) is the Nut Tart Box (2007), sculpted out of wood in the exact shape of a nut tart. Placed among the freshly created Carrot and Radish Earrings (2013) and the Leek Brooch (1989) with diamond roots and other country garden delectables, it looked very much in context.

The chance to see such a display of artistry in the jewelry world may come with about the same frequency as this year’s convergence of Hanukkah and Thanksgiving.

Despite her busy schedule, Adlin confesses to running down from her office to the exhibition two or three times a day, just to see people’s reactions.

I also confess to being mesmerized by the display, to the delight of Adlin, who said, “The whole atmosphere with the lighting and the works is meant to be a gestalt, it’s meant to make you remember what you’ve seen.”