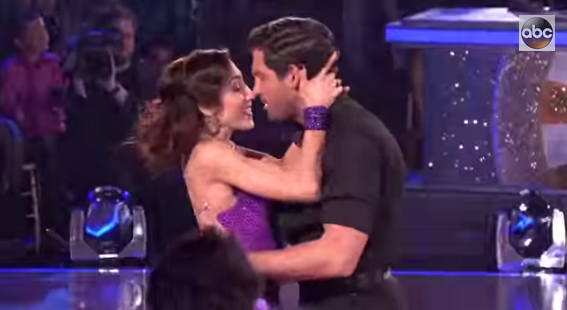 Meryl Davis has addressed the dating rumors flying around about her and Maksim Chmerkovskiy, saying that they have a friendship.

“I’ve never been one to comment on my personal life, but Maks and I have an amazing relationship. Our chemistry, I think, definitely stems from, you know, our friendship, the time we spent together on and off the dance floor, and we had an amazing time,” Davis said recently on HuffPost Live.

When asked about a relationship in a previous interview on Good Morning America, Davis had said that “we’re not dating,” before adding that “we like to keep the personal lives personal.

Fans have been speculating about a romance after the obvious chemistry between the pair during their winning run on Dancing With the Stars.

Charlie White, Davis’ partner in Olympic figure skating, said that while dancing performers have to create the appearance of a romantic relationship, so dating rumors are natural. He would know, because there have been many rumors about him and Davis as well.

“It’s part of the territory of portraying characters that have to look like they’re in love,” White said. “You want to make it believable, you want people to walk away convinced that you are an actual couple. We worked with mimes, we worked with actors, and it’s a real science. We always took it as a compliment, especially coming off the Olympics, when people would ask us.”

Previously, Maks’ brother Val told Us Weekly that Maks loves Meryl more than he’s loved any woman. But he said that the love is beyond the romantic.

“She was good for him, but I feel it wouldn’t do their love justice,”Val said. “One makeout session in the middle of the dance or to label it that they are a couple—it sounds great, but that’s not what it is. He loves her probably more than I’ve seen him love another woman—he loves and adores her—but it’s like a King Kong type of relationship.”

In fact, Val said, the whole Chmerkovskiy family has fallen in love with Davis as a person.

“We love Meryl, but I don’t know if they were meant for each other or just meant to be in each other’s lives for this moment,” he explained. “Or for many moments, definitely, as it’s a friendship they’ll keep for a very long time.”