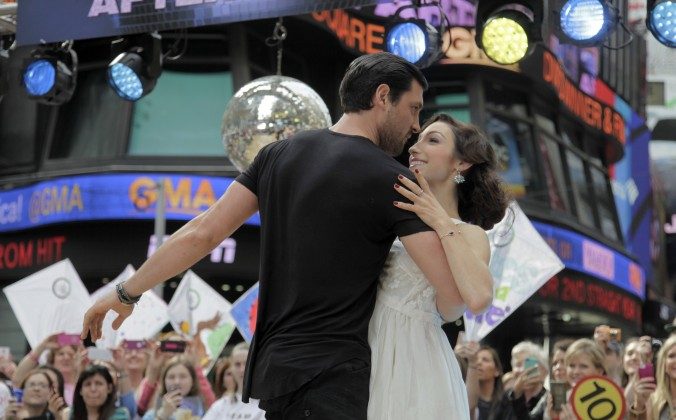 Meryl Davis Boyfriend? Fans Keep Wondering Whether Meryl and Maks Are Dating as Pair Spend the Weekend Away from Each Other

Fans of Dancing with the Stars and of Meryl Davis and Maksim Chmerkovskiy themselves are still wondering whether the pair is dating even after Davis denied that they are.

“Are you all boyfriend and girlfriend, or lovers or anything?” Wendy Williams asked the two in a recent interview.

“We like to keep the personal lives personal,” the Olympian figure skater added when asked if she had a boyfriend.

Sources told E! News and Us Magazine that the pair are in fact not dating, but some don’t believe the official word.

One entertainment blog wondered “Who are these sources? Is Meryl asking them to plant these cover-ups.” Especially because the pair went out to dinner after they won Dancing with the Stars. They were joined by eight others, so it wasn’t an intimate one-on-one thing.

Either way, Davis and Chmerkovskiy spent the Memorial Day weekend apart as they no longer have to rigorously train for “DWTS.”

Meryl posted a photo on Instagram announcing that she had returned home while Maks went on a fishing trip at an undisclosed location.

This doesn’t necessarily mean the end of a possibility for a relationship, says Bustle.

“I wouldn’t give up hope just yet. Maks and Meryl have spent the past few months more or less attached at the hip. There are very few people who love someone enough to want to spend every waking moment with them and the distance could be a good thing for their relationship (because they’re totally in a relationship, you guys). If there’s one thing that any fan of “Maksyl” has learned, it’s that absence does make the heart grow fonder. Just look at how happy they were to see each other again during Dancing with the Stars.

Maybe after taking some time to be apart and reflect, they’ll realize it’s not the stage chemistry and the hype that makes them want to be together. One weekend isn’t enough to sink all the “friend dates” or gushing praise, and Maks and Meryl didn’t win Dancing with the Stars by giving up on each other. Their relationship might not be in the romantic stage yet, but it’s genuine and deep enough to survive a small break. Whether or not their fans can handle them spending that much time apart is an entirely different question.

Rumors about Davis and her possible boyfriends have been flying for years, because many people believed that she was dating Charlie White, who she skates with and with whom she won the Olympic gold medal recently.

But the pair are only close friends, having grown up together and having competed together for almost a decade.

“I guess the funny thing is, especially at this point, we know each other so well that it’s scary most of the time,” said Davis in a Team USA interview. “We have spent the majority of the last 16 years together and we’ll say the same thing at the same time or finish each other’s thoughts. I think people would be shocked to learn exactly how well we know each other and how creepy it can be.”

White was asked by Yahoo whether it is odd to portray being in love with someone who is not his romantic partner.

“It’s just sort of the way we all fall in,” he said. “Because we’ve been doing it for so long it just seems so natural. Meryl and I have been skating together for 16 years. We’ve known each other for our whole lives. It just feels really natural that that’s how we sort of present ourselves to the world that cares about us as skaters.”

The frequent questions about them being a couple are actually a good thing, White said.

“Obviously we get a lot of questions about whether the two of us are dating, and that’s a good thing, because that means we’re doing our job out on the ice. Meryl and I are oftentimes trying to portray people who are in love. We’ve always been great friends, and we have a special relationship, but we’ve never been romantically involved.”