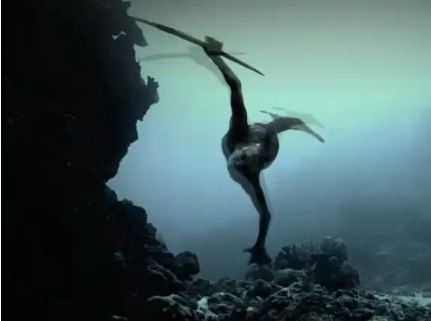 A screenshot from the preview of "Mermaids: The New Evidence," purportedly showing a mermaid. (Screenshot/Discovery Channel)
12- OBSOLETE

Mermaids new evidence 2013: The Discovery Channel is airing a follow-up to its controversial Mermaids series on May 27 several times, starting at 10 p.m.

“Mermaids: The New Evidence,” drew 3.6 million viewers, the most in the history of the channel.

The show follows Dr. Paul Robertson, former NOAA scientist, and journalist Jon Frankel, as they claim to dig further into the story of whether mermaids exist or not.

Last year’s series, “Mermaids: The Body Found,” provoked questions from the public about whether the government has seen or captured mermaids and kept the information secret.

NOAA, or the National Oceanic and Atmospheric Administration, put out a statement last year saying no evidence of “aquatic humanoids” has ever been found.

The Discovery Channel says on Twitter that the special brings to light never seen before evidence of mermaids.

Charlie Foley, creator, writer, and executive producer of the series and special, told Mother Nature Network that “The most frequent explanation is that of sun-strained sailors at sea too long who mistook manatees and dugongs for mermaids, but I think you’d have had to have had a lot of grog before you could mistake a manatee for a mermaid.”

Foley said he took a documentary approach because “I think it works because you can believe they are real, and personally, I don’t think there’s any story more appealing than a legend that can be believed.”

However, while many say Foley has created a spoof, he says that they cite real-world phenomena, such as the Bloop recordings, which were taken in the deep ocean but never identified.

“And the Navy really has denied conducting deadly sonar tests that have resulted in mass whale die-offs only to later acknowledge that, in fact, they really were conducting and still conduct to this day deadly sonar tests that result in mass whale die-offs,” he said. “Much of what’s in ‘Mermaids’ is not informed conjecture or made-up story but fact.”

People reacting to the show had different reactions.

“‘Mermaids the New Evidence’ was as equally credible as the US Government’s claims that Navy sonar testing isn’t killing whales,” says one.

“‘The New Evidence’ is a Fake Documentary,” said another, David Shiffman. “It’s completely fake. There are disclaimers in the credits.”