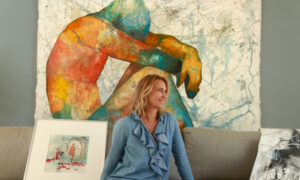 At Sunset Cliffs in San Diego, a life-sized statue of a mermaid can be seen on a giant rock off Ocean Beach, causing residents to wonder how and why it got up there.

Since it was discovered late May, residents, tourists, and photographers have flocked to the area to catch a glimpse of the impressive piece of art.

Apparently, it’s not the first time mysterious artwork has appeared on Ross Rock.

Other items spotted on the rock in the past include a large pterodactyl, the year “2010,” a tiki head, and a Raiders fan inside a toilet, according to ABC 10 News.

Some local residents have said they witnessed the mermaid statue being assisted to the top of the rock with a rope ladder draped over the boulder. After it was lifted up, the mermaid’s hands were drilled into the rock securely.

“It’s a cool aesthetic, and I think we’ve needed something like that since the peace sign was taken down years ago. I think it’s cool to have something here to bring that magic back,” another man said.

The City of San Diego reportedly said there were no plans to remove the statue, according to ABC 10 News.