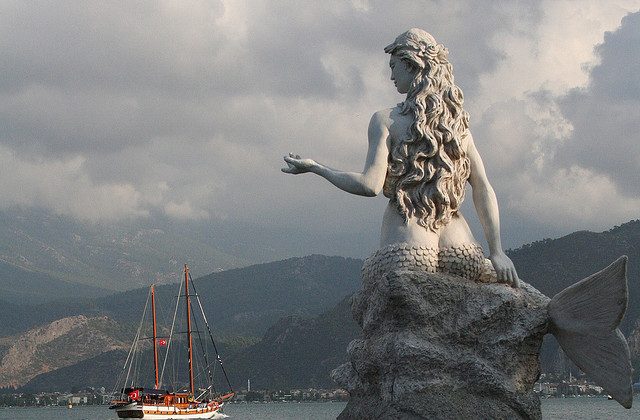 Photos that purport to show a “mermaid” on beaches in Hawaii and Egypt are fake.

The bunk images have been circulated around the Internet for years, and they’re actually a mermaid prop from the Pirates of the Caribbean films.

Some of the photos also include Photoshopped effects–some with a “skeleton.”

The dubious-looking website Stunning-News posted images of the mermaid prop and made up a story about them.

“A Mermaid is found along a beach of Kilauea Falls, Hawaii. Unfortunately she already passed away. These pictures are really stunning and we honestly don’t know what to say about it. We don’t know if this beauty is real or not, it’s up to you to judge about these pictures. The first discovery of mermaids was in the Greenland Sea,” the fake article says.

The article has tens of thousands of shares on Facebook as of Wednesday.

As Hoax-Slayer notes, the photos are of mermaid props. “However, the mermaid is not real. In fact, it is a prop from the movie Pirates of the Caribbean On Stranger Tides,” it says.

“Some of the circulating stories attempt to embellish their claims by adding in images of other fake mermaids. These ‘extras’ include an image of a mermaid sculpture created by the artist Juan Cabana and fake mermaid skeleton images created via a Worth1000 Photoshop contest,” says the site.

And as one person sarcastically commented, “If you guys don’t believe this is real, then THINK AGAIN. I traveled to Egypt once and I found a mermaid of my own. THESE ARE NOT FAKE. The only reason you all don’t know about this is because the Obama Administration wants to cover it up so they can sell us socialist health care. DON’T LET THE GOVERNMENT CONTROL YOU.”