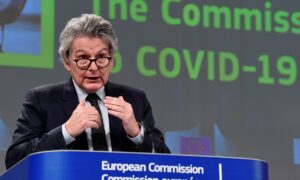 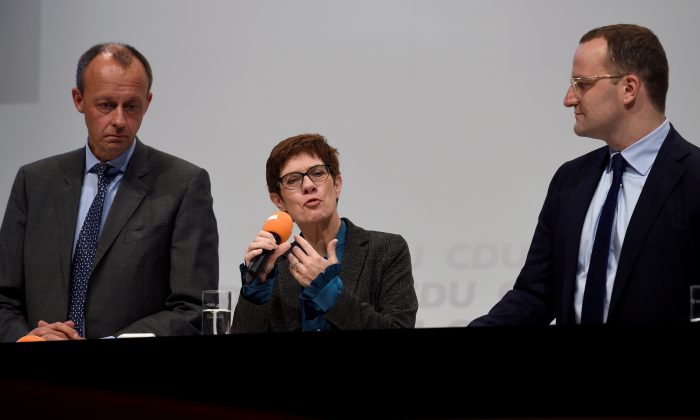 Friedrich Merz, trailing in the race to succeed Chancellor Angela Merkel as leader of the Christian Democrats (CDU) party, has sparked controversy by questioning Germany’s constitutional guarantee of asylum.

“We must be prepared to discuss the constitutional right to asylum if we seriously want a European immigration and refugee policy,” Merz said at a campaign rally in the eastern state of Thuringia on Wednesday, Nov. 21, to applause from local party delegates.

Germany’s Constitution, drafted in part to atone for World War ll Nazi crimes, guarantees asylum to all those who are “politically persecuted.”

But as millions seek sanctuary in Europe, either to escape conflict zones, avoid persecution or to better economic prospects, many in Germany are calling into question the country’s immigration policies and argue it’s time for a revamp.

The danger, Merz argued, is that Berlin’s constitutional guarantee could force Germany to accept refugees that a common European asylum policy would otherwise reject. The European Union is divided over how it should cope with an influx of migrants, and has been working to hammer out a bloc-wide framework.

Merz elaborated on his remarks on Thursday, saying he does not question the fundamental right to asylum, but that it must be re-evaluated in context of EU-wide immigration rules, to ensure Germany is not unfairly disadvantaged in burden-sharing arrangements.

“We need to address the issue of how the fundamental right to asylum and a European approach can work together,” Merz said, according to AFP. “In my opinion, this debate must be conducted in peace and objectivity by the CDU.”

Merz’s remarks were also widely reported as an implied rebuke to Merkel’s decision in 2015 to admit over a million refugees, which upturned European politics and fueled an anti-immigration surge across the continent.

Since the height of the migration crisis in 2015, the EU has implemented measures to better control external borders and migration flows, and unauthorized arrivals to the bloc have been reduced by more than 90 percent.

Over 1.8 million asylum-seekers have entered Europe since 2014, and despite the lower figures in recent years, most observers believe that because structural factors contributing to illegal migration remain largely in place, it is only a matter of time before those numbers start to rise significantly.

So far this year Spain has seen 56,200 illegal migrants arrive by sea, Greece 28,700, and Italy 22,500, according to the UNHCR. Overland arrivals in Greece have also climbed sharply to 14,000, a threefold increase compared to the same period last year.

Merz also called for clarification that the UN Global Compact for Migration (GCM), which Merkel has said she intends to sign, does not create new grounds for asylum. This had to be “suitably clarified,” he said, suggesting a protocol statement by the federal government or a resolution by the German lawmaking body, the Bundestag. He cited as an example that climate change should not be considered a form of political persecution and therefore a reason for asylum.

“These are things that we can not accept in Germany,” Merz said, “even through the back door.”

The UN said the GCM provides a framework for facilitating safe and orderly migration globally, and sets out a range of actionable commitments that could influence legislation and policymaking for member states.

But the pact has been criticized on grounds that it fails to draw a clear distinction between legal and illegal migration, that it could serve as an inspiration for individuals to engage in irregular migration, and that it undercuts the ability of sovereign countries to manage their borders.

A number of countries, including the United States, have said they will not adopt the agreement, set to be signed in Marrakesh, Morocco, on Dec. 11-12.

But Merz, who with his remarks appeared to align himself against Merkel with opponents of the migration pact, drew fire from other CDU politicians, including Health Minister Jens Spahn, third-placed challenger and another critic of Merkel’s refugee policies.

“The constitutional right to asylum for political refugees is a great virtue of our constitution, created against the background of two world wars, great suffering, and vast displacements,” wrote Spahn on Twitter.

Merz trails Annagret Kramp-Karrenbauer, dubbed “mini-Merkel” for her similarities in policy and style, in polls of party members. The winner will be in pole position to lead the EU’s largest country and economic powerhouse.

The party will choose a successor to Merkel, who is stepping down after a string of regional election setbacks, at a congress in Hamburg in December.