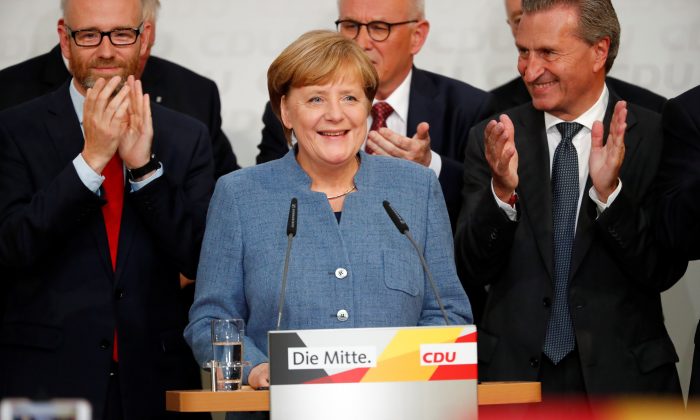 BERLIN—Chancellor Angela Merkel won a fourth term in office on Sunday but will have to build an uneasy coalition to form a German government after her conservatives haemorrhaged support in the face of a surge by the far-right.

The anti-immigration Alternative for Germany (AfD) stunned the establishment by winning 13.1 percent of the vote, projected results showed, a result that will bring a far-right party into parliament for the first time in more than half a century.

Merkel’s conservative bloc emerged as the largest parliamentary party but, with just 33.2 percent of the vote, saw its support slump to the lowest since 1949 – the first time national elections were held in post-war Germany.

Her main Social Democrat rivals also received their worst result since the 1940s — just 20.8 percent — after nearly half of voters repudiated the two parties that have dominated Germany since World War Two.

With parliament now fragmented, Merkel appears likely to cobble together a tricky three-way coalition with a pro-business group and the Greens.

Merkel said the success of the far right was a test for Germans. It was important to listen to the concerns of their voters and win them back.

“Of course we had hoped for a slightly better result. But we mustn’t forget that we have just completed an extraordinarily challenging legislative period, so I am happy that we reached the strategic goals of our election campaign,” Merkel said.

“We are the strongest party, we have the mandate to build the next government – and there cannot be a coalition government built against us,” Merkel added.

The election was fought on the tense backdrop of surging support for far left and far right parties across Europe.

Germany in particular is coping with the arrival of more than 1 million refugees and other new migrants, with tension with Russia since Moscow’s incursions into Ukraine, and with doubt about Europe’s future since Britain voted to quit the EU.

After large changes last year, from the Brexit vote to the election of U.S. President Donald Trump, leaders of Europe’s establishment have looked to Merkel to rally the liberal Western order.

While she maintained  status quo in Europe, she now faces an unstable situation at home as she must now form a coalition, an arduous process that could take months.

Immediately after the release of exit polls, the deputy party leader of the Social Democrats (SPD), junior partners in a “grand coalition” with Merkel’s conservatives for the last four years, said her party would now go into opposition.

“For us, the grand coalition ends today,” Manuela Schwesig told ZDF broadcaster. “For us it’s clear that we’ll go into opposition as demanded by the voter.”

Without the SPD, Merkel’s only straightforward path to a majority in parliament would be a three-way tie-up with the liberal Free Democrats (FDP) and the Greens, known as a “Jamaica” coalition because the black, yellow and green colors of the three parties match the Jamaican flag.

Such an arrangement is untested at the national level in Germany and widely seen as inherently unstable. Both the FDP and the Greens have played down the prospect of a three-way coalition, but neither won enough seats on Sunday to give Merkel a majority on its own.

Whatever the make-up of her coalition, Merkel, 63, faces four years of government in a fragmented parliament after the return of the FDP – unrepresented at national level for the last four years – and the arrival of the AfD.

Founded in 2013 by an anti-euro group of academics, the AfD has surged as an anti-immigrant group in the wake of Merkel’s 2015 decision to leave German borders open to over 1 million migrants, most of them fleeing war in the Middle East.

The party’s entry into the national parliament heralds the beginning of a new era in German politics that will see more robust debate and a departure from the steady, consensus-based approach that has marked the post-war period.

The other parties elected to the Bundestag all refuse to work with the AfD, which says it will press for Merkel to be “severely punished” for opening the door to refugees and migrants.

After the AfD hurt her conservatives in regional elections last year, Merkel, a pastor’s daughter who grew up in Communist East Germany, wondered if she should run for re-election.

But with the migrant issue under control this year, she threw herself into a punishing campaign schedule.

Despite losing support, Merkel, Europe’s longest serving leader, will join the late Helmut Kohl, her mentor who reunified Germany, and Konrad Adenauer, who led Germany’s rebirth after World War Two, as the only post-war chancellors to win four national elections.

By Paul Carrel and Maria Sheahan